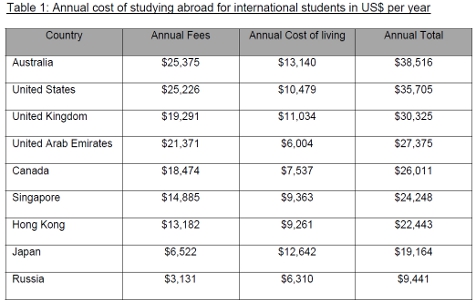 Australia is the most expensive country for overseas students with a combined average cost of university fees and living costs totalling more than US$38,000 per year, according to recent research by HSBC

The HSBC research reviewed data on higher education in 13 countries and territories around the world, finding that Australia was followed closely by the US, with total costs over US$35,000, and the UK, third with $30,000.

Despite this, Australia has remained one of the most popular destinations for international students with its stocks likely to be further boosted by the continuing fall in the Australian dollar and improved visa processing.

HSBC Australia head of retail banking and wealth management Graham Heunis said the strength of the Australian economy and the Australian currency has kept the cost of studying in Australia high relative to other markets.

“While Australia has continued to enjoy higher economic growth than other western markets over the past five years, this has also led to a higher Australian dollar which has placed a strain on the price competitiveness of our export sectors, including education,”  Mr Heunis said.

The Australian education sector suffered a 12 per cent drop in international enrolments between 2009 and 2012 but nevertheless has remained a popular destination for international students with a 2011 study showing 21 per cent of Australia’s entire student population was from overseas, proportionately higher than Canada, UK, and the US (13 per cent, 18 per cent and 3  per cent respectively).

“While Australia’s education sector has taken a hit in terms of overseas student numbers, the proportion of international students in Australia remains strong, indicating many are looking past the cost impact to other factors such as quality of life and education and proximity to home,” Mr Heunis said.

“Having withstood the cost pressure of the high Australian dollar for the past three years, Australia’s tertiary institutions could see international student numbers swing back with the falling Australian dollar.”

HSBC forecast the Australian dollar against the US dollar to drop to $0.86 in the fourth quarter of 2014 compared to a high of $1.09 in mid-20124 in its recent research report, ‘HSBC Currency Outlook’, published in July 2013.

“While Australian universities may have seen a dip in international enrolments in recent years, the falling Aussie dollar and simplified visa process should spark a resurgence in overseas students placing Australia on top of their destination lists.”