The state’s shipbuilding industry has had a big win, with the federal government selecting Austal to build 21 Pacific Patrol Boats at its yard in Henderson in a contract worth at least $500 million. 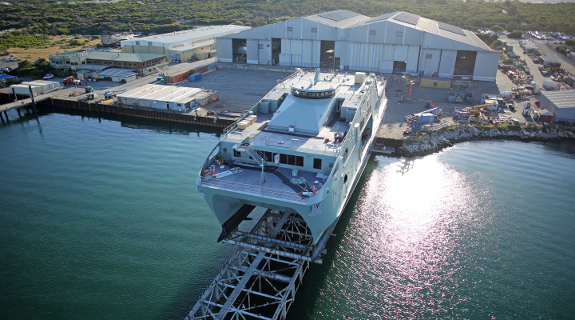 Austal has produced boats for the Royal Navy of Oman at the Henderson facility.

The state’s shipbuilding industry has had a big win, with the federal government selecting Austal as preferred contractor to build 21 Pacific Patrol Boats at its yard in Henderson in a contract worth at least $500 million.

The company has secured a further $400 million for sustainment work over the life of the boats, with Austal planning to conduct support work from its existing facility in Cairns.

Adelaide has won the biggest parcel of work – the $35 billion Future Frigates program.

Building of the OPV vessels will shift to Perth in 2020 when the frigate program begins in Adelaide.

There was no announcement for the $20 billion plus submarine building program, which has also garnered interest from players in Henderson.

Prime Minister Malcolm Turnbull said the government had sought to maximise opportunities for the defence industry to participate in the program.

“These three projects will ensure Australia retains a sovereign capability to build and sustain its naval vessels,” he said.

“Together they represent close to $40 billion worth of investment in Australia’s future naval capabilities and our naval shipbuilding industry.”

Austal said it would work to finalise the contract over coming weeks, with new chief executive David Singleton saying the company had a long history of constructing patrol boats in Henderson.

The vessels will likely be used by Australia’s South Pacific neighbours.

That includes work for the Royal Navy of Oman, while the company has additionally won contracts for US naval work at its Alabama yard.

“This announcement is a huge vote of confidence in West Australian industry signifying the strength, expertise, and track record of our shipbuilding sector,” she said.

"(It's) an acknowledgement by the government that Henderson is now Australia’s second shipbuilding hub."

Premier Colin Barnett said it would be a boost for local jobs and the economy.

"WA has a strong reputation in these highly competitive and demanding markets and today's announcement is recognition of this," he said.

"From 2020, WA will take over the construction of the Offshore Patrol Vessels (OPV) from South Australia in a contract worth more than $3 billion, creating more than 400 direct jobs.

"I also congratulate Austal Ships on being selected as the preferred tenderer to construct and maintain up to 21 replacement steel-hulled Pacific patrol boats at their premises at the Australian Marine Complex.

"This contract is valued at $500 million and is expected to create about 130 jobs.

"WA has the infrastructure, capability and expertise to participate in future naval defence shipbuilding and submarine programs - our industry is innovative and our workshops are ready."

Both Senator Reynolds and Mr Barnett committed to continue lobbying the federal government for the state to win defence-related work.

Opposition leader Mark McGowan said the government had not lobbied hard enough and called for the introduction of a state minister for defence issues.