Austal has won a $63 million contract to build two patrol boats for the Australian Department of Defence, with the terms of the deal signed with National Australia Bank including a buy-back clause. 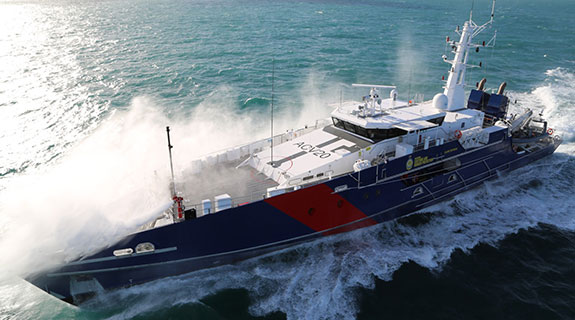 Austal will build two Cape Class patrol boats in a deal worth $63 million.

Austal has won a $63 million contract to build two patrol boats for the Australian Department of Defence, with the terms of the deal signed with National Australia Bank including a buy-back clause.

The two Cape Class patrol vessels will be delivered to Nab by mid-2017, and subsequently chartered to the Commonwealth for at least three years, with Austal to provide in-service support to the vessels.

In a statement, Austal said it was providing a residual value guarantee to Nab, which could be exercised at the end of the charter term.

“In the event that the Department of Defence returns the ships at the end of the charter and Nab exercises the residual value guarantee option, then Austal will purchase the vessels at a pre-agreed price,” the shipbuilder said.

It said the terms of the deal were similar to an existing 13-year contract  in place with the charter of Westpac Express (not affiliated with the bank Westpac) for defence ships for the US Navy.

“It is a terrific vote of confidence in Austal and the products we design, build and sustain at our Henderson shipyard,” he said.

Mr Bellamy also said the company was well positioned to support the Commonwealth in its future shipbuilding plans, hinting at the upcoming contract award by the Australian government to build defence submarines for the country.

Last week, Austal shares lost a quarter of their value on news that problems at its operations in the US could cut up to 2 per cent of its US profit margin.