Shipbuilder Austal has signed a $305 million contract to build and maintain Pacific Patrol Boats for the Australian government, however the contract’s price tag was smaller than what the Commonwealth had flagged. 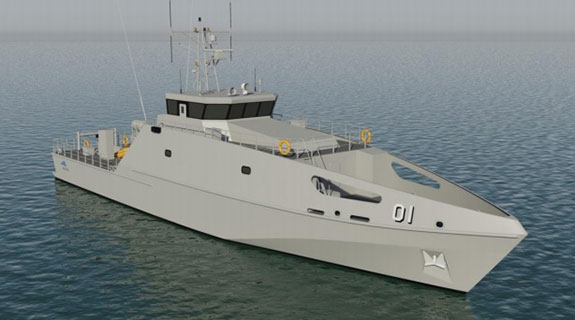 An artist's impression of the Pacific Patrol Boats Austal will build for the Commonwealth.

Shipbuilder Austal has signed a $305 million contract to build and maintain Pacific Patrol Boats for the Australian government, however the contract’s price tag was smaller than what the Commonwealth had flagged.

Austal said today it would construct 19 steel-hulled patrol boats under the contract, which had options for an additional two vessels, and would also provide sustainment support for an initial seven years.

The service life of the vessels is estimated at 30 years, so Austal plans to bid for further sustainment support work during the initial seven-year period.

Austal was selected as preferred contractor for the job last month, with Prime Minister Malcolm Turnbull estimating the value of the program at over $500 million.

Mr Turnbull also valued the full support and sustainment component of the deal at about $400 million over the life of the vessels.

Austal’s seven-year sustainment support contract is worth just $24 million, but it expects maintenance costs on the vessels to increase over time.

In a statement, Austal said it would begin design work immediately, with construction expected to begin during the second half of next year and first delivery pinned for the end of 2018.

“The vessels will be constructed at Austal’s shipyard in Henderson, securing about 120 direct jobs plus many more in local and Australian subcontractors who have worked with Austal extensively over many years,” the shipbuilder said.

“In addition, support work will be performed at Austal’s existing contracted facility in Cairns, which will engage subcontractors in the region to deliver support services.”

Austal chief executive David Singleton said minor investments in training and equipment would be required to support construction of the sizeable vessels.

“By expanding into steel we will further enhance the shipyard as we position Austal to bid and win additional domestic defence shipbuilding contracts,” he said.

“The continuous build program adopted by the Australian government for the Pacific Patrol Boats replacement project and planned for other programs delivers the government and taxpayers a more cost efficient vessel construction process as well as sustainable and continuous employment in Henderson which creates the bedrock for further growth.

“We have won this program against significant international competition which demonstrates the competitiveness of our Australian design and shipbuilding industry.”

Austal also announced today it had been awarded an $US18.5 million ($A23.8 million) contract to procure long-lead-time materials for an Expeditionary Fast Transport vessel for the US Navy.

The materials to be procured include main propulsion engines, water jets, and stern ramps.