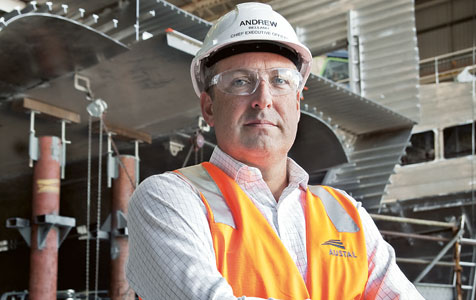 Austal chief Andrew Bellamy will step down in April.

Austal chief executive Andrew Bellamy is quitting after five years in charge of the Henderson-based shipbuilder.

Non-executive board member and Poseidon Nickel managing director David Singleton will shadow Mr Bellamy from the start of February before taking over as chief executive on April 4.

Mr Singleton will step down from Poseidon at the end of the month to take on his new role at Austal, with a total fixed annual remuneration of $1.05 million, including superannuation, which will be paid in cash and equity.

In a statement, Austal said Mr Singleton had a good understanding of the company, having served on the board since 2011.

Mr Singleton, of UK nationality, moved to Perth in 2003 to take on the role of managing director at Clough, until he left the company in 2007 to take on the same role at Poseidon where he stayed for nine years.

Prior to his tenure at Clough, Mr Singleton was CEO of Alenia Marconi Systems, a defence and civil electronics joint venture company between BAE Systems and Finmeccanica, for three years.

"Austal is extremely well positioned for further growth in both Australia and the US," he said.

Poseidon said it intends to “reorganise” as a result of today’s announcement, but will not recruit a replacement CEO until nickel prices improve.

“Chris Indermaur will remain as non-executive chairman and will take on a number of the duties of the CEO on a part time basis,” it said in a statement.

“Whilst these senior personnel remain fully committed to Poseidon, they have also agreed to reduce their pay by 20 per cent as previously announced.”

Austal shares ended last week at $1.44, down more than 40 per cent since the company announced in December its FY 2016 earnings from its US shipyard are expected to be lower than in fiscal 2015.