Austal more than just a blip on US defence-spend radar

ANALYSIS: It seems like a case of right place, right time for shipbuilder Austal, although it has been a success many years in the making. 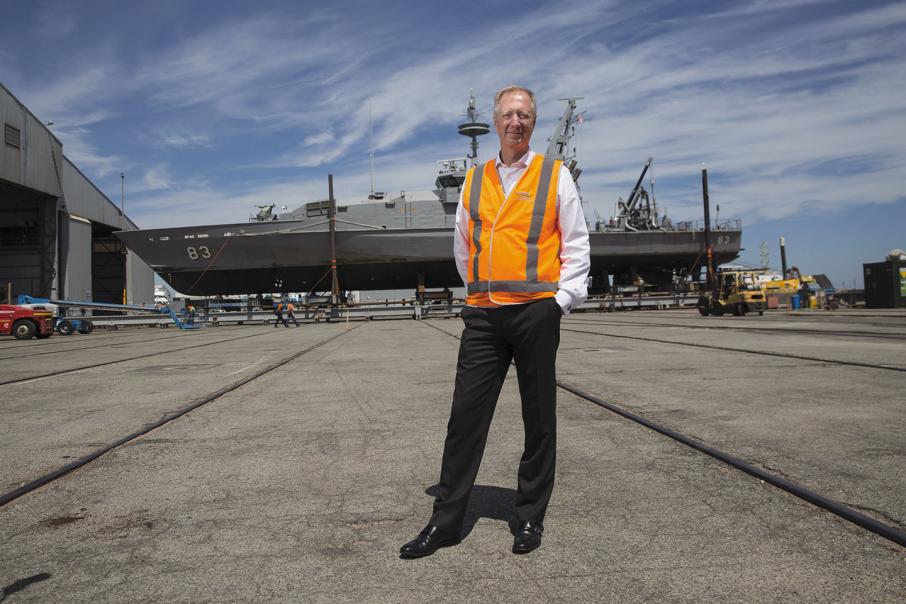 David Singleton is buoyant about Austal’s business opportunities in the US, where it employs 5,000 people. Photos: Attila Csaszar

ANALYSIS: It seems like a case of right place, right time for shipbuilder Austal, although it has been a success many years in the making.

Not every Australian would be proud to claim they were Donald Trump’s poster child, but that’s how David Singleton, chief executive of Perth-based shipbuilder Austal, describes his company’s relationship with the US government and its navy.

In what has become a win-win situation for both sides of a remarkably successful business alliance, the US is getting the sort of mid-sized warships it wants and Austal is posting strong profits, with the prospect of more to come.

A glimpse of how the future is unfolding for Austal was contained in last month’s half-year financial report, which revealed a lower profit, thanks largely to the cost of settling an old arbitration claim, and a record order book and work-bidding program.

Converting $3.2 billion in orders and a further $9 billion in bids into bookable revenue and cash in the bank is never easy, as Mr Singleton knows from his time in charge of the engineering and construction contractor, Clough.

But the reason for his confidence in the competitive world of shipbuilding is that two major streams of Austal’s business are expanding at the same time – defence-related work and commercial ferries.

“Ferry demand is the best we’ve seen since 2008,” Mr Singleton said at the company’s Henderson yard south of Perth, where work is scheduled to start next month on a 109-metre ferry valued at more than $100 million for Denmark’s Mols Linean ferry service.

Apart from the slightly amusing fact that Austal is building a ship for a country once the home of seagoing Vikings, the timing of Mr Singleton’s meeting with Business News was significant, as it took place on the same day that Defence Minister Christopher Pyne opened a new Austal facility to build 19 relatively small Pacific Patrol Boats, with 12 being donated to Pacific Island nations.

The convergence of ferry and defence work at Henderson goes some way to explaining why Austal’s share price has risen by 60 per cent since the middle of last year and could go a higher.

What investment analysts are starting to see is the potential for Austal to deliver the coordinated growth from its two primary revenue streams, after decades of promising much but always suffering the setbacks which are the life of any contractor.

Easy as it is to say this time it will be different, there are two unmistakable improvements in the outlook for Austal.

The first is the core business of ferry making, which launched Austal 29 years ago and is undergoing a revival after nine flat years.

But easily the most important business is defence work; and while business is picking up in Austal’s Henderson yard, the real driver is its US operations.

The man there is US President, Donald Trump, who is pumping up his country’s defence budget and encouraging other countries to do the same.

As business currently stands for Austal, 80 per cent of its work is occurring in the US, primarily at a boatbuilding facility at Mobile in the southern state of Alabama, where the vast majority of Austal’s 5,000 employees work.

Mr Singleton estimates that 90 per cent of Austal’s current work is defence related, and 80 per cent is in the US, a structure that leads to the question whether a company based in Australia is overexposed to the US at a time of rising nationalism in that country, and elsewhere.

“We’re doing exactly what Donald Trump wants,” Mr Singleton said. “We are an Australian company that has invested $US400 million in a US facility, we’re employing 5,000 people in that country, and we’re making a valuable contribution to the US Navy.

“I reckon we qualify for the title of Donald Trump’s poster child.”

Understanding Austal can sometimes be confusing for an outsider, especially anyone driving past the company’s Henderson shipbuilding yard on the road connecting Fremantle with Rockingham.

From the outside it looks small and somewhat messy and a drive past, or even into the shipyard, leaves an impression that the facility has seen better days.

However, the picture changes as you get closer to the business end of the Henderson yard, with a sleek Cape-class patrol boat in the harbour and a 57-metre Armidale-class patrol boat on a slipway, where it is undergoing a remediation and upgrade work.

The apparent contradiction between the world-class ships produced at Henderson and the scruffy face the yard presents to the world is a function of its history and the recent focus of Austal management in growing its US operations – a point underlined by the workforce headcount of 600 at Henderson (a little more than 10 per cent of the 5,000 at Mobile).

The historic aspect of the Henderson yard is important for today’s potential investors in Austal because it is a reminder of the challenge in running a contracting business, especially one with manufacturing at its heart, in a state where resources dominate.

The roots of shipbuilding at Henderson can be traced back to a Dutch boat-builder, Dick Verboon, who pioneered the construction of aluminium-hulled ships under the banner of Australian Shipbuilding Industries (ASI).

Austal’s chairman, John Rothwell, took up where Verboon left off. And while Austal has had its ups and downs, Mr Singleton said the business today could be traced to a strategic paper written by Mr Rothwell in 1990 in which he mapped out the combination of commercial and defence business units.

“We’ve come a long way since then but the basic structure is in that 1990 paper,” Mr Singleton said.

The future for Austal is likely to be more of the same, only bigger and with variations. Steel-hulled boats are being added to the company’s signature aluminium hulls, and technology is becoming increasingly important in every ship.

“We see a future of sensor-rich ships feeding information into computers, which can work out the most efficient way to operate.

“If machine-data and artificial intelligence can offer a fuel saving of 2 per cent to 3 per cent, then it makes a big difference in operating costs to the vessel’s owner.”

As important as the changes in design, construction and the use of new technologies are for Austal, the big issue for the company is the rising tide of defence spending as the world shakes off 20 years of relative peace and enters what is, essentially, a new arms race.

President Trump has outlined plans to boost the US defence budget by around 10 per cent to $US600 billion annually, and is demanding that other countries with which it has alliances lift their defence spending to 2 per cent of gross domestic product – a target already achieved by Australia.

Extra defence spending is music to Mr Singleton’s ears, and dollars in Austal’s bank account, so long as it can land some (though perhaps not all) of the future work it is chasing, including more Littoral Combat Ships and Expeditionary Fast Transports for the US Navy, more Cape-class patrol boats for the Australian Navy and, potentially, work on Australia’s next frigate building program.

As ever, the key to the company’s success will be converting the promise and corporate promotional potential of building slick ships into profits and dividends for investors.

Financial analysts believe that, this time around, Austal will deliver on its promise as commercial and defence work harmonise, and management successfully manages the challenge of rapid growth and how that can drive costs higher.

JP Morgan reckons Austal’s revenue in the current financial year will slpi slightly, from $1.5 billion to $1.4 billion, but with pre-tax profit rising from $79 million to $92 million, that’s good enough for a steady dividend of 4 cents a share.

Macquarie believes Austal’s revenue will remain nearly steady, with a pre-tax profit this year of $60 million. Argonaut is tipping a modest revenue slide and pre-tax profit of $89 million.

Those forecasts, as they are for any contractor, should be read with care. But they should also be seen as what could be the start of a long-overdue golden decade for a rare WA business – a manufacturer plugged into a growing US defence budget.