Austal has doubled its interim dividend after growing revenue and boosting its cash flow, despite posting a 41.8 per cent fall in profit for the six months to December. 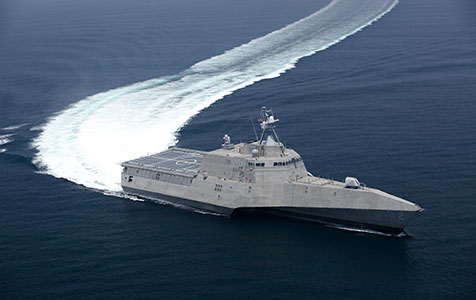 Austal says earnings were affected by reduced shipbuilding margins in the US, coupled with lower throughput and margins in Australia.

Austal has doubled its interim dividend after growing revenue and boosting its cash flow, despite posting a 41.8 per cent fall in profit for the six months to December.

The shipbuilder’s half-year net profit fell to $16.8 million, while revenue rose 9.9 per cent to $747.4 million compared with the previous corresponding period.

The company ended the half year with a net cash position of $30.6 million, while earnings before interest, tax, depreciation and amortisation fell 25.6 per cent to $41.8 million.

In a statement, Austal said earnings were affected by reduced shipbuilding margins in the US, coupled with lower throughput and margins in Australia.

However outgoing chief executive Andrew Bellamy said the company had 21 vessels under construction, which had contributed to the first-half result.

“Austal was able to deliver strong earnings, strong cash flow, a further reduction in debt, and higher dividends for shareholders,” he said.

“The speed at which the Littoral Combat Ship program has matured since delivery of LCS 6 – our first as prime contractor – has been slower than we initially expected as flagged in December, driving lower earnings from our US shipyard in the half.

“We were also awarded more than $100 million in work for our growing support division in the six months, largely in the US, which is in line with our strategy of growing Austal’s naval sustainment capabilities.”

Revenue from Austal’s US division grew 28.1 per cent to $638.4 million in the six months to December, while revenue in the shipbuilder’s Australian division fell 4 per cent to $105.6 million.

“Our focus in the US is on delivering quality vessels that meet the US Navy’s requirements and ensuring that we do so as efficiently and effectively as possible,” he said.

“Our team in the US is working hard on LCS 8 and LCS 10 to deliver within the schedule and we recognise that there is significant work to be done to drive improvements across the program for subsequent vessels.

“All major military programs have been and will continue to be a source of debate amongst US lawmakers, with the LCS and future frigate not immune.

“The defence shipbuilding opportunity in Australia is significant and we believe that our credentials as Australia’s only global prime defence contractor and export competitiveness ensure that we are well placed to win a share of the future programs.”

Mr Bellamy also said the company’s projects for some of its customers in the Middle East had been hit by the lower oil price; however the fall in energy prices had lowered the operating cost of vessels.

“We are fielding growing interest from the European ferry market,” he said.

Mr Bellamy is set to step down as CEO in early April, with non-executive board member and former Poseidon Nickel managing director David Singleton to take on the role.