Austal back in black but below expectations 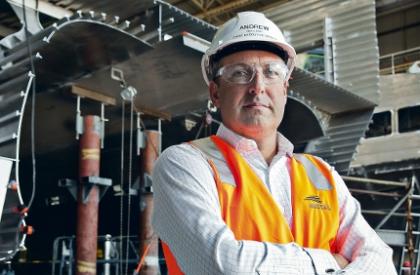 Shipbuilder Austal has reported an $11 million net profit for the year ended June 30, after the company’s revenue reached a record $653 million.

Austal today announced that revenue for FY2012 was up 29.7 per cent, but chief executive Andrew Bellamy said the profit result was below expectations.

Mr Bellamy said the result had been adversely impacted by a sustained economic downturn in key markets, the strong Australian dollar, and rapid growth and first-in-class issues at its US operation.

“Importantly, Austal has identified where and how it can improve, and is taking appropriate action,” Mr Bellamy said.

“The second half performance, which saw an $18.9 million turnaround from a first half pre-tax operating loss of $6.3 million, shows those initiatives are working.”

Austal’s Australian shipbuilding operation was unprofitable over the year, because of low activity in the commercial vessel market.

Mr Bellamy said, however, a total order book backlog of $2.57 billion would underpin the company’s revenue streams for a number of years, with support contracts extending to 2019, and shipbuilding work running through to 2016.

“The work primarily involves serial production of stable vessel designs, which enables the operations to focus on increasingly efficient and profitable project delivery,” he said.

“This is especially true in the US, where the facilities expansion is now essentially complete.