Ausdrill the latest to be hit by exploration slowdown 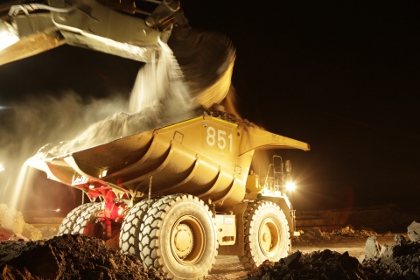 Ausdrill's African mining operations have been hit by wet weather.

Mining services group Ausdrill's stock has dropped on the ASX today after it reduced its profit guidance for the 2013 financial year as a result of project delays and cutbacks, softening margins and one-off costs.

Ausdrill provided a market update yesterday afternoon, which said Fortescue Metals Group’s decision to slow down its expansion plans would result in a hit of up to $50 million in full year revenue, if the company is unable to redeploy its equipment.

The firm also said its Australian operations had been adversely impacted by the reduced amount of exploration activity and equipment hire, due to falls in bulk commodity prices.

In Africa, Ausdrill said its Burkina Faso operations had slowed to a halt because of wet weather, as have the start-up of operations at Syama in Mali.

Ausdrill said its 2013 results would also include a series of one-off costs, including a $7.2 million negative foreign exchange swing due to the strength of the Australian dollar, $8.2 million in acquisition costs relating to its purchase of the Best Tractor Parts Group earlier this year and a $4.6 million write-off relating to bad debts owned by Central Norseman Gold Corporation, which has been placed into administration.

The company said it also expected a slight drop in margins in exploration and equipment hire, where the slowdown is becoming evident.

Ausdrill forecast revenue growth of 15 per cent while maintaining similar margins in August, excluding the contributions of the BTP Group.

BTP is expected to contribute 10 per cent of Ausdrill’s consolidated revenues for FY2013.

Ausdrill said it expected to report increased revenues for the full year of at least 20 per cent, with the outcome dependent on a progressive redeployment of equipment in the iron ore industry, as well as a continued ramp up at the Syama project.

“After adjusting for the aforementioned items we expect that Ausdrill, including BTP, can still achieve net profit growth of 15 per cent on an underlying basis (or approximately 10 per cent excluding BTP) whilst on a reported basis the net profit is expected to be the same or slightly better than that achieved in 2012,” Ausdrill said in a statement.