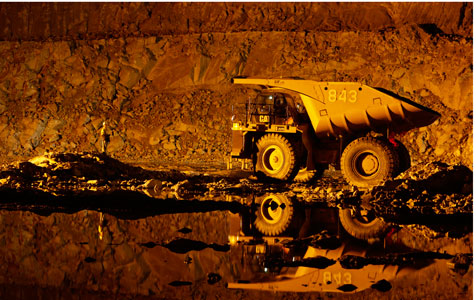 Mining services contractor Ausdrill is reviewing its cost structures and restricting its spending in the wake of a 20 per cent fall in net profit on the back of slowing conditions in Australia and Africa.

Ausdrill will pay a final dividend of 5.5 cents per share.

The result was not unexpected, with Ausdrill flagging in April it expected earnings to come in $22 million under its previous forecasts.

Managing director Ron Sayers said the rise in revenue was pleasing during a challenging time for the industry.

Mr Sayers, however, said the company’s exploration and equipment sales, hire and parts business’ profit was hit particularly hard by the reduction in mining expenditure.

The company will focus its attention on servicing producing operations over FY2014, which Mr Sayers said would hold it in good stead despite the ongoing uncertainty.

Ausdrill said it would review cost structures and working capital levels, reduce capital expenditure and extract the full benefit of cost synergies and revenue opportunities within the group to lift its earnings.

It said it would also focus on its MinAnalytical and Energy Drilling Australia divisions to increase its revenue.

“The Ausdrill Group will be working to achieve the returns necessary for a company of its size and with the deleveraging plans being pursued will ensure that the group is well placed in the mining services sector to benefit from any upturn and opportunities that arise in the mining industry,” the company said in a statement.