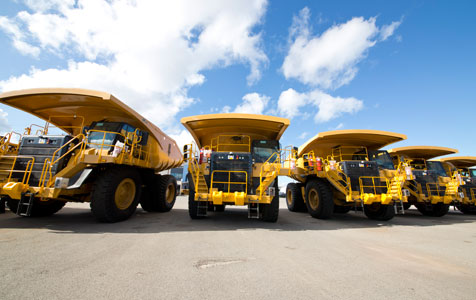 Mining services groups Ausdrill and Emeco have joined peer Calibre Group in announcing the general slowdown in mining and exploration activity in Australia will take a big chunk out of their expected profits.

Ausdrill announced an updated profit forecast today, predicting its earnings would come in as much as $22 million under previous forecasts.

The company said it expected to report a net profit after tax of between $90 million and $96 million for the current financial year; two months ago, it said the profit would "at least match" the $112 million result for the 2011-12 financial year.

“Ausdrill considers the result is acceptable considering the adverse market conditions that have beset the industry since September 2012,” the company said.

Ausdrill said there had been delays in exploration activities returning to normal levels following the Christmas shutdown, with drilling, mineral assaying and some manufacturing not showing signs of a recovery in the near-term.

“This has resulted in surplus mining equipment in the sector, with trading conditions in the equipment rental market remaining below expected levels,” Ausdrill said in a statement.

Ausdrill said recent weaknesses in coal, iron ore and gold prices had also negatively affected its other mining services divisions, as did delays in the ramping up of the coal seam gas sector in the eastern states.

Meanwhile, Emeco said it expected its operating NPAT for FY13 to be in the range of $40 million and $44 million.

The company said its second half earnings reflected challenging market conditions in Australia and Indonesia, while its Chilean and Canadian operations were showing strength.

In February, Emeco lodged a $22.5 million NPAT for the first six months of the financial year, and said it expected earnings in the second half to be slightly below those of the first.

Despite the current weakness, Emeco chief executive Keith Gordon said the company maintained a strong outlook for its Australian and Indonesian operations in FY14.

“We are working on a number of encouraging opportunities in the Australian market which we anticipate will come to fruition towards the end of FY13 and provide positive momentum in utilisation heading into FY14,” Mr Gordon said in a statement.

Emeco shares closed steady at 49.5 cents, after initially gaining in morning trade. However this followed sharp falls in the company's stock price in recent weeks.

The announcements follow Calibre Group’s warning last week that its profit would fall up to $16.7 million short of expectations.

Calibre also said it had revised its guidance because of challenging market conditions and delays in new projects.