Two separate UWA studies have unearthed surprising findings about what drives frustrations between drivers and cyclists, and how liveable Perth is (and could be) in terms of ‘walkability’. 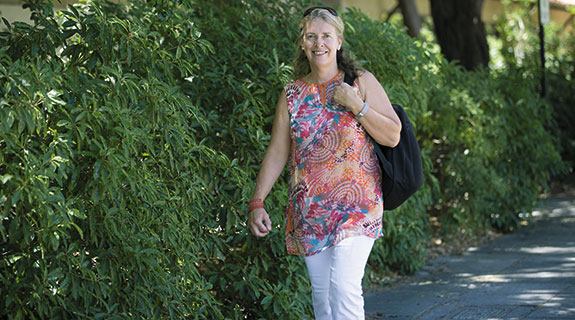 Two separate UWA studies have unearthed surprising findings about what drives frustrations between drivers and cyclists, and how liveable Perth is (and could be) in terms of ‘walkability’.

Better infrastructure and a shift in attitude towards cyclists by other road users are among the key findings from a pair of studies undertaken at the University of Western Australia into Perth’s ‘liveability’.

These outcomes may not be surprising, but the attitudinal studies also threw up the unexpected.

An online survey of 276 cyclists and motorists, developed in the UK and now being followed up in Perth, uncovered the psychological attributes that lead to road rage towards cyclists.

Dr Fruhen, who works within the Centre for Safety, found it was not cyclists’ risky behaviour that drew much of the enmity from motorists but rather perceptions, particularly the belief that cyclists were a nuisance or were breaking the law.

Those who didn’t ride reported more negative attitudes towards cyclists than motorists who occasionally cycled.

However, the study also revealed that even regular cyclists experienced frustration with bike riders on the road once they got behind the wheel.

“We thought that the people who cycled themselves would be more considerate towards cyclists,” Dr Fruhen said.

“Whether you cycled or not, didn’t make a difference in terms of the behaviour that you reported yourself.”

Dr Fruhen is continuing her research into how people’s attitudes affect their behaviour towards cyclists on the road, as well as why there are fewer female cyclists and commuters per capita in Australia than in other Western countries.

“You can have the best infrastructure, but that might not necessarily mean people use it, so you also have to look at the attitudes and behaviours of people on the roads. How we can all share the roads and get along well,” Dr Fruhen said.

Over the past decade Dr Bull has investigated compliance rates of planning policy aimed at reducing car dependence, encouraging walking, cycling and public transport use, as well as promoting a sense of community.

Yet fewer than half of policies aimed at making Perth more liveable are being implemented by the state.

Dr Bull, who is the Centre for the Built Environment and Health director, told Business News she was ramping up calls for stronger implementation, with a particular focus on policies for new suburbs on the fringe.

“When you go to Northbridge, Mount Lawley, East Vic Park … these are areas people walk in,” she said.

“But when you go out to the middle and outer suburban areas, particularly some of the newer ones, we don’t walk so much because the distances to get anywhere are much further; shops, schools, places to go out are not within a people friendly or walkable distance.”

Dr Bull said 62 per cent of people she surveyed who lived in ‘low walkable’ neighbourhoods said they would prefer to live where they could walk to shops, cafes, schools and other services.

“A walkable city is a proxy for a liveable city because if we get the infrastructure right – footpaths, good pedestrian crossings, short block lengths and walkable distances and places to go to – well guess what, we’re more likely to walk. Our research has shown you can double walking,” she said.

Dr Bull said compared with cities such as Beijing and New Delhi, Perth was doing quite well, but many aspects of the CBD and its fringes still created problems that discouraged walking or cycling and forced people to resort to their cars.

Where trips were short enough, she said, encouraging people to forgo their cars was important, but there was another aspect to designing walkable cities that went beyond providing healthy alternatives.

“Some people don’t have that choice so it’s very important for promoting the health of everyone that we provide safe and pleasant environments for walking ... (including) to the bus and the train,” Dr Bull said.