Atlantic is using a big insurance payout to rebuild the Windimurra vanadium plant nearly a year after a fire forced the project to shut down, but the company still faces major operational and financial challenges. 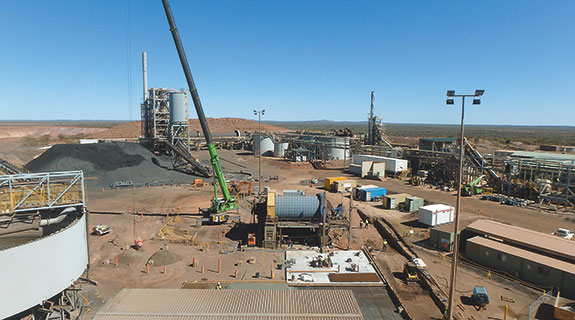 UNDER WAY: Primero Group is rebuilding the beneficiation plant at Windimurra

Atlantic is using a big insurance payout to rebuild the Windimurra vanadium plant nearly a year after a fire forced the project to shut down, but the company still faces major operational and financial challenges.

It’s no small irony that, in the midst of a mining sector downturn, Atlantic is one of the few companies in Western Australia proceeding with a major development.

Atlantic is the latest in a string of companies, including original developer Precious Metals Australia and multinational Xstrata, to have owned the Windimurra vanadium project.

All have ended in tears, after facing technical problems, cost blowouts or market downturns – or all three.

Twelve months ago Atlantic appeared to be putting its difficulties behind it as it ramped up production at the Windimurra plant.

That all changed on February 4, when a fire destroyed the beneficiation plant and forced closure of the operation.

That was the final straw for chairman and managing director Michael Minosora, who spent four years trying to make the project a success.

In March 2014, new chairman Gary Lewis and new chief executive Daniel Harris took over from Mr Minosora, with both maintaining a low profile, focusing instead on addressing a raft of operational and financial challenges.

They have achieved considerable progress, with Windimurra now a hive of activity as lead contractor Primero Group, which was awarded an $18 million design and construction contract in October, proceeds with rebuilding the beneficiation plant at a total cost of $30 million.

Atlantic expects construction of the beneficiation plant will be completed in a little more than 12 months from the date of the fire.

The rebuilding contract is covered by Atlantic’s insurance, which so far has delivered payouts amounting to $63 million.

Total payouts could be in the order of $100 million, according to Atlantic, depending on the period of business disruption.

In addition to rebuilding the beneficiation plant, Atlantic wants to proceed with several other capital projects to remove production bottlenecks, at an estimated cost of $130 million.

The most significant is a plan to replace the secondary and tertiary crushers and high-pressure grinding rolls – which were built by Mineral Resources under a ‘build own operate’ contract in 2007 – with a semi-autogenous grinding (SAG) mill.

Atlantic said the previous operator of the Windimurra project used SAG mill technology successfully before it was removed and replaced with the current system, but has declined to say whether it was still investigating possible legal action.

Mineral Resources has responded to previous suggestions of legal action by insisting that all responsibility for any defects rests with Atlantic.

Atlantic’s long-term production target is a rate of about 5,000 tonnes per annum of vanadium.

It has acknowledged this is lower than previously envisaged for the Windimurra project, but said a thorough review “demonstrates a long-term sustainable future for the business”.

The company needs to secure additional funding before it can proceed with these projects, and that means doing a deal with existing stakeholders, who are owed some $570 million.

During the past year, Atlantic has negotiated a series of agreements with lenders allowing it to continue operating despite being unable to service its debts.

Atlantic’s goal is to implement a solvent restructuring of its wholly owned subsidiary, Midwest Vanadium, which holds much of the group’s debt.