Astron Environmental Services has merged with its smaller, associated business, Astron Soil and Water, as the Perth group adapts to a tougher market and tighter margins. 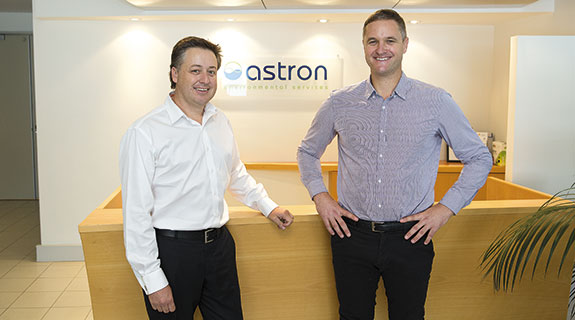 FORWARD: Astron directors Will Wishart (left) and Julian Kruger are lifting their stakes in the business. Photo: Attila Csaszar

Astron Environmental Services has merged with its smaller, associated business, Astron Soil and Water, as the Perth group adapts to a tougher market and tighter margins.

Managing director Will Wishart said that, despite the deteriorating conditions in Western Australia, Astron was one of the few consultancies in Perth not to dramatically scale back its operations in recent times.

“We are definitely feeling pressure on margins across the business, however, I think we are doing outstandingly well compared to some of our peers, many of whom are in continuous cycles of redundancies,” Mr Wishart told Business News.

Astron has 85 staff and is ranked as the fifth-largest environmental services firm in WA, according to the BNiQ database.

Mr Wishart said the mining services sector, which makes up 40 per cent of Astron’s business, was facing extreme margin pressure.

“We are thankful to have a very diversified portfolio which includes oil and gas, land development and government services,” he said.

Mr Wishart said serious cost reductions were now being pushed through in the oil and gas sector, following the big fall in oil prices and the transition from development to production.

Astron has benefited from two recent contract wins – a two-year contract with Apache Corporation to deliver a suite of environmental monitoring projects across its WA assets, and an extension to its environmental services contract with Chevron Australia, covering its WA oil, Wheatstone and Gorgon assets.

Mr Wishart said Astron, which has been operating for more than 30 years, established the Soil and Water business in 2009.

It contributed about $2 million to the group’s annual revenue of $11 million.

Mr Wishart said two of the founders of the Soil and Water business had left Astron, and the group was also looking for synergies and cost savings.

“It just became a natural move to merge,” he said.

“This merger suits our clients who prefer to do business with the one entity that they have come to trust over many years of continuous service,” Mr Wishart said.

He said he and fellow director Julian Kruger were continuing to lift their stake in the business, buying equity from Peter and Vicki Long who established Astron in Karratha in 1985.