The state government expects lower contracting and construction rates will deliver savings of more than $1 billion on its asset investment program over the next four years, but has not committed to any major new infrastructure projects. 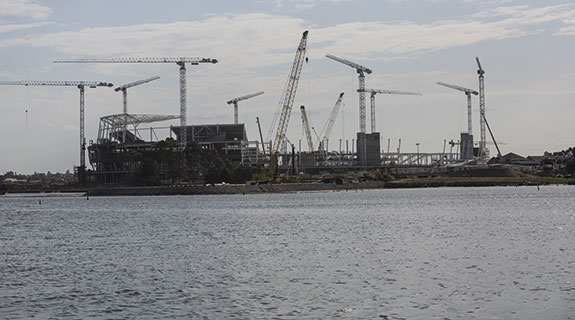 The state government expects lower contracting and construction rates will deliver savings of more than $1 billion on its asset investment program over the next four years but has not committed to any major new infrastructure projects.

Its asset investment program will be $5.9 billion in 2016-17 with transport projects accounting for nearly one third of the total.

Spending will increase to $6.1 billion in 2017-18 before declinig gradually.

The total over the four-year forward estimates period is $23 billion.

Major projects include the $1.4 billion Perth Stadium - due for completion by 2018 - and the $2 billion Forrestfield-Airport rail link.

The government has also announced the reallocation of state funding for the construction of a $49 million Ellenbrook Bus Rapid Transit project, to be built in 2016-17 to 2017-18.

It comes after the government backed away from more ambitious plans, including a heavy rail link.

Treasurer Mike Nahan said the government would invest $300 million towards new and existing education infrastructure in 2016-17.

Major projects include Stage 1 of North Butler Senior High School, expected to cost $69 million, and an expansion of Shenton College at a cost of $49 million.

Just $1 million has been allocated for further studies on the development of a new western suburbs high school, designed to reduce pressure on existing high schools in the area.

The budget includes $378 million over the next four years to deliver a state-of-the art museum to house Western Australia’s collection of artefacts and natural history.

The total cost of the new Northbridge museum will be $428 million.

Dr Nahan told a budget briefing that rapid growth in the state’s prison population meant a new prison would be needed soon, and said it would be a public-private partnership.

“I am sure going forward our new prison will be a private prison, built, owned and operated, for a couple of reasons," Dr Nahan told a budget briefing.

“They have better outcomes in terms of making sure people don’t come back in, but more importantly they do it at half the cost of a public prison.”

The $221 million Eastern Goldfields Regional Prison will become operational in 2016-17, adding 350 beds to the state muster.