Having listened to many winners and losers in the state election, there are some clear lessons emerging. 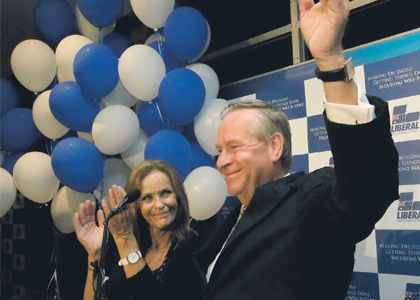 Having listened to many winners and losers in the state election, there are some clear lessons emerging.

PREMIER Colin Barnett’s unexpectedly large win in last Saturday’s state election has cemented his power at a historic time for the state.

Analysts will spend a long time deciphering the tea leaves of this election and pondering what it means, especially for Labor and the Greens after their big losses.

But there are a few key lessons that stand out.

The most obvious, which often gets lost among all the bluster, is that Western Australia is enjoying an extraordinary period of economic prosperity.

The state is experiencing strong and sustained growth, unemployment is low and the high dollar means average Western Australians have more buying power than before.

Not everyone is better off; tourism, manufacturing and some retail businesses are struggling, and Perth is affected by worsening congestion.

But the overall picture is positive, and that is always good news for the incumbent government, especially a first-time government led by a respected premier.

Another key lesson is that the people of WA want governments to make decisions and get things done.

This was highlighted by the debate over the major sporting stadium and the Elizabeth Quay development.

It appears that Labor’s campaign took a hit when Mark McGowan vowed to shift the stadium development to Subiaco and scale down the foreshore development, despite there being some good evidence to back this stance.

The John Langoulant-led taskforce had backed the Subiaco option, dismissing Burswood as being unsuitable, and the so-called ‘city gatekeepers’ have raised numerous questions about the high-rise Elizabeth Quay plan.

But that doesn’t seem to have counted for much in the wider electorate, which just wants to see progress; and Colin Barnett has vowed to deliver that.

The development of the Mandurah rail link may be one reason why the punters have this mindset.

Most people have forgotten the cost blow-outs, the industrial disputes and the strident criticism from those who said it would be a dud.

Instead, people see thousands of commuters using the train service every day.

It’s a similar story at Perth Arena. Most people have very quickly dismissed the controversy over this project and are now pleased Perth finally has a world-class indoor arena.

Another electoral lesson, clear to all, is that federal Labor is a toxic brand.

Former state government minister Alannah MacTiernan, who has always been known for speaking her mind in a forthright manner, was the person who brought this to the fore.

Speaking on election night, she said Labor was facing a bloodbath at the federal election in September, and the only step that could minimise the damage was for Prime Minister Julia Gillard to step aside.

The weak support for Labor was really sheeted home by the loss of seats including Forrestfield, Belmont and Balcatta.

Labor has also been decimated in the mining and pastoral region, which not so long ago was an area where it had strong support.

These electorates, like most around the country, are populated with hard-working aspirational people; self-employed tradespeople, small business operators and others who aspire to get ahead on their own initiative and hard work.

The Liberal philosophy speaks to these people, who might be characterised as the new working class.

They aren’t poor, and they don’t have any interest in trade unions; in fact, they probably see unions as getting in the way.

The recriminations in Labor circles include criticism of the ‘union.

This was an obvious dig at Dave Kelly and Simone McGurk, who were the only new faces to enter state parliament on the Labor side.

They are both long-time unionists, and another long-time union leader, Joe Bullock, is poised to move into federal parliament at the September election.

The capability of these individuals is open to debate, but there is a broader issue.

Whether or not unionists actually sit in parliament, the bigger issue is the sway that unionists have over policymaking in the Labor movement.

The party that captures the middle ground is the party that wins power -the Liberals have done that whereas Labor languishes on the fringe.