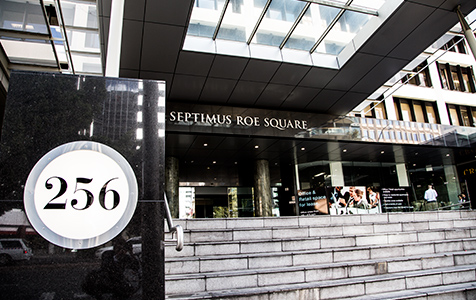 The Septimus Roe Tower, which Aspen is seeking to offload. Photo: Attila Csaszar.

Aspen Group is seeking to sell its $311 million commercial property portfolio, including the Septimus Roe office tower on Adelaide Terrace, as the developer and fund manager plans to build towards a return to profit.

The result was driven down by a $36.8 million hit the company took on the consolidation of its Aspen Development Fund and a write-down in value of its Ballina retirement village, which the company said was under contract for sale post June 30.

Aspen also said an impairment at its Aspen Karratha Village and increased project costs at its Adelaide City Central development had resulted in an additional $13.7 million write-down.

At Karratha, Aspen said its tenant, Woodside Petroleum, had not opted to extend its lease beyond January, resulting in a devaluation of 13 per cent, or $7.4 million.

Newly-installed chief executive Clem Salwin said the company had made significant progress on simplifying its operations and narrowing the business focus, but the results were nonetheless disappointing.

"We are acutely aware that the share price is trading persistently below NTA and that returns to shareholders have been unacceptable," Mr Salwin said in a statement.

"As a major part of our strategy, we have decided to look to dispose of our $311 million commercial property portfolio."

Over FY2013 Aspen was able to earn $203 million from non-core asset sales, including the $114 million sale of all of its properties in its Aspen Diversified Property Fund.

That included the sale of its remaining stake in the Byford-on-the-scarp residential development, to Cedar Woods for $9 million.

The company said it would also gain $8.3 million from the sale of its Ballina Retirement village, which is expected to settle in December.

Aspen paid a distribution of 0.75 cents per share on August 23.