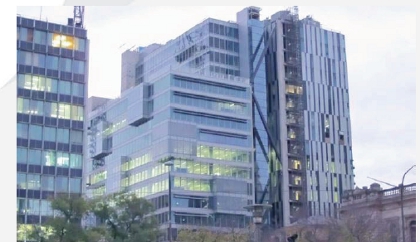 The ATO office development in Adelaide, which is 50 per cent owned by the Aspen Development Fund No.1.

Aspen Group says it is planning to sell out of its residential and commercial development divisions as a result of an ongoing review of operations, while also unveiling a $101.4 million capital raising plan to reduce its debts and boost working capital.

Aspen provided an update of its strategic review this morning, saying initial findings would result in a $36.6 million impairment on loans to associates.

The developer launched the review in the wake of a near-$100 million loss for the 2012 financial year, which included $136 million in impairments and culminated in the resignation of managing director Gavin Hawkins last month.

Chairman Frank Zipfinger said the group had continued to identify the core strengths of the business; its investment property portfolio and the Aspen Parks Property Fund.

“Aspen’s non-core businesses have also been identified, being the residential and commercial development divisions, which the group plans to exit."

Mr Zipfinger said a one-for-one non-renounceable entitlements offer, which was launched today was the first crucial step to provide the group with the financial strength necessary to complete the review.

The entitlements offer, for institutional investors and existing shareholders, will be priced at 17 cents per share, and will be fully underwritten by UBS.

The developer said it was seeking around $60.9 million from the institutional component of the offer, and $40.5 million from retail shareholders.

Aspen stocks were placed in a trading halt pending release of the announcement this morning, having last traded at 23.5 cents.

Aspen said $35 million of the proceeds would be used to reduce debts with NAB.

The Aspen Development Fund No.1 is a 50 per cent owner in the ATO office tower development in Adelaide.

In return for the $35 million repayment, NAB has agreed to waive a weighted lease covenant breach on the core facility and reduce its covenant from 2 years to 1.25 years until June 30, 2013.

NAB also agreed to waive an LVR covenant breach on the Aspen Development Fund No1 facility and granted a five-month extension to its maturity date, stretching it out to February 2014.

Aspen also committed to reduce its total facilities with NAB by a further $71 million by December 31, 2013, through the sale of non-core assets.

For the remaining funds, Aspen said $25.3 million would fund the likely exercise of a put option commitment to an Aspen Development Fund No1 shareholder and $34 million would be put towards working capital.

The put option, where Aspen would purchase the shareholder's 27.8 stake in the company, is exercisable between September 27 and October 15, Aspen said.

Transaction costs will come in at $5 million, while $2.1 million will be applied to terminate excess interest rate swaps.

Mr Zipfinger said the offer allowed the group to de-risk its balance sheet.

“It will provide the financial flexibility for the group to operate from an improved position and undertake its strategic review to simplify the business and focus on core strengths to improve security holder returns,” Mr Zipfinger said.