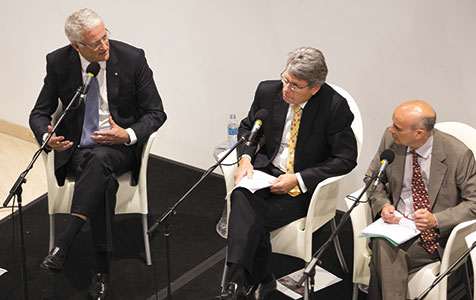 The Chamber of Arts and Culture WA has repeated its call for the state government to pay more attention to the arts sector.

The chamber last week approached the government for an increase in support in the 2015-16 state budget, warning that any further decline in funding could have severe ramifications for the sector.

In the latest budget, the Barnett government allocated just 0.49 per cent of its total spending to the arts, a figure chamber chairman Warwick Hemsley said was representative of ‘chronic underfunding’.

“When you don’t get that big a slice of the budget pie, any move to make that slice even smaller has a big impact,” Mr Hemsley said.

“With key themes of long-term planning, uplifted investment in people and systems and overdue maintenance of arts and cultural spaces, the submission seeks to overturn the chromic underfunding that has hamstrung the sector for many years.”

The chamber’s executive director, Henry Boston, told Business News the government had failed to respond to its bid for an additional $20 million in annual funding, which it had been requesting for more than two years.

“I look at the money that is sitting in other sectors, and I’m not saying that funding is mutually exclusive … I just look at the level of money that is needed to transform what is an ailing sector in many ways – it’s very little when you compare it to the massive amount of money that’s going into other areas,” Mr Boston said.

In addition to the call for a $20 million annual increase in funding, the chamber’s submission calls for a long-term cultural plan for the state and quarantined funding of $100 million to address the overdue maintenance of ageing infrastructure.

The chamber’s demands come as arts organisations ponder revenue sources as the softer economic conditions take a toll on the level of corporate sponsorship arrangements.

Private philanthropy is making some of the shortfall, however, with Mr Hemsley telling a recent panel discussion at the Art Gallery of Western Australia there were limitations with government funding.

“Whatever we can do with what government contributes, we can do a lot more with private philanthropy,” he said.

Fellow panellist Michael Chaney, who is a keen funder of the arts and played a pivotal role in Wesfarmers’ support of AGWA, said corporates had shouldered a lot of the responsibility.

“I think there’s huge potential here in the west for an increase in private philanthropy from individuals who generally haven’t been great supporters of the arts, with a few exceptions,” Mr Chaney said.

This year marks the 25th anniversary of the AGWA Foundation, which is the art gallery’s conduit for philanthropic funding including bequests.

As the accompanying table shows, foundation funds have accounted for up to 26 per cent of AGWA’s revenue.

Art gallery director Stefano Carboni said foundation funds had paid for more than 4,500 works of art and accounted for 80 per cent of acquisitions made in the past five years.

Currently 25 per cent of the art gallery’s entire collection was paid for by the foundation.