Arts left behind in election race 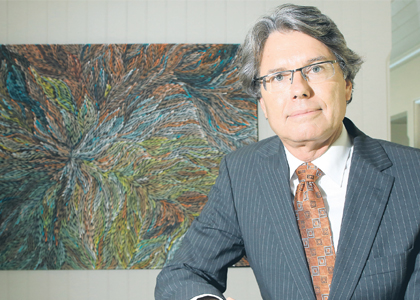 MORE QUESTIONS: Warwick Hemsley and many others at the Chamber of Arts and Culture event were disappointed at the lack of clear policy detail from the major political parties. Photo: Bohdan Warchomij

OF all the issues likely to feature prominently in the lead-up to the March 9 state election, it’s perhaps no surprise the arts is a long way down the list.

In fact, just a couple of days from the poll, very few commitments to the arts have been made by either major party.

The Chamber of Arts and Culture WA hosted an arts debate less than two weeks before the polling date and invited representatives from the Liberals, Labor, Greens and Nationals to speak.

The chamber’s chairman, Warwick Hemsley, was disappointed with the outcome of the debate, as were many from the arts community in attendance.

“There were encouraging comments from all participants acknowledging the importance of arts and culture in our community - but where are the policies from Labor and Liberals detailing specific commitments and pledges?” Mr Hemsley said.

Following the debate, the chamber released a statement urging each party to announce its arts policy.

As of the evening of Tuesday March 5, when WA Business News went to press, the chamber’s request for policy detail remained unsatisfied.

Indexation, the adjustment of funding according to inflation, was among the issues raised at the debate, although current for Culture and Arts Minister John Day refused to be drawn on making a specific commitment.

“I can’t commit to a specific quantum here because it is something that has to be written into the forward estimates, but it is definitely something that I will continue to argue for,” Mr Day said.

Opposition culture and arts spokesman John Hyde said that Labor could not make any commitment to indexation as it could not gain access to current budgetary figures.

“With the information we have we can’t make forward commitments,” Mr Hyde said.

“That would be economically irresponsible.”

Repeatedly throughout the debate, Mr Hyde emphasised how people should judge a political party on what it accomplishes when in power.

As examples of Labor’s commitment to the sector, Mr Hyde named the $73 million Ignite package, which was not renewed by the Barnett government, and the establishment of several theatres as among his party’s achievements.

The major parties agreed on the importance of arts programs in rural and isolated parts of the state, but neither appeared willing to make an announcement about new funding for such programs.

The Nationals were more forthcoming, however, pledging $16 million over four years to regional arts in response to the Vote Arts campaign by Country Arts WA.

The Greens also announced their support for calls that $10 million be invested annually in the arts sector through Royalties for Regions.

Labor’s decision to defer construction of a new museum was also raised at the debate, with Mr Hyde defending the construction delay in order to help fund the Metronet rail plan and casting doubt on the government’s ability to fund its own policy.

“What we have deferred is the Liberals’ commitment,” he said. “The only money for a new museum in the Liberal and National party’s budget is $70 million of planning money.

“So they can talk all they like about building a new museum, building means bricks and mortar”.

Mr Day retorted that $428 million had been set aside for the total budget and that it expected the museum to be complete by 2019.

“It is very far away, but it’s a major project and it needs to be planned well and designed well,” Mr Day said.

“I can assure you that this project will be going ahead under a Liberal-National government.”