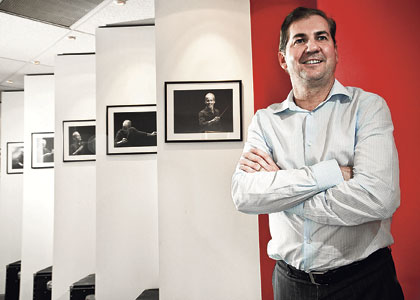 FOR most businesses, dollar figures are a clear and unambiguous indication of performance – markets and investors respond quickly to bad/good news or results.

Those in the arts sector are faced with a different challenge, however, as proving their worth to their stakeholders – the community – often involves performance indicators that include ‘social impact and inclusion’.

So how are such intangible outcomes measured?

Arts and health organisation DADAA has worked to develop quantitative and qualitative research that proves the strong correlation between the arts and health – and outcomes in both fields – through its ‘Disseminate’ project.

The organisation’s research has produced a range of outcomes, including statistical data, submissions for state and federal government policy papers, and broad community narratives that collate multiple personal responses and stories.

Due to the vast amount of information on the Disseminate website – funded by Rio Tinto, Healthway and Australia Council for the Arts – it has become an internationally recognised access point for the sector.

Users in 36 countries have accessed the site, and partnerships have been formed with universities in the UK.

DADAA has signed a partnership with broadcaster SBS, which will screen Disseminate films.

DADAA chief executive David Doyle said there was a lack of peer-reviewed research into the correlation between arts and health impacts, and that the personal, individualised narrative results coming out of the Disseminate research was just as valid as quantitative research.

“There is real power in human, individual stories, that to me is where you can really start to quantify the change in people’s lives through participation in arts and culture,” he said.

The project itself used short film to provide participants with a means of expressing themselves and was screened with the aim of generating employment and advocacy opportunities for the individuals.

Mr Doyle said the digital element of this project was empowering for individuals involved in the documentary.

“Through [the film] people with intellectual disabilities for the first time on this scale lead the story, their story, their history, through their voice,” he said.

“And importantly, they enter and start to participate in Australia’s digital culture, which for most people with an intellectual disability is the last big bastion of exclusion – digital exclusion.”

LivePad41 is a technology developed by Ian Martinus and John Royle, which aims to collate and visually represent community responses to public events, including the arts, public forums and wider political events.

Used by creative advocacy organisation FORM at its recent Canning Stock Route exhibition at Perth Convention Exhibition Centre, LivePad41asks individuals a question, such as ‘how does the arts make you feel?’, obtains information through text and direct response and feeds it into a public-space big screen in order to generate greater community engagement and dialogue.

Messrs Royle and Martinus are in the process of growing the technology’s application and believe LivePad41 has the potential to enhance public and civic dialogue – something that could lead to greater representation of the qualitative responses to the impact of the arts.

Mr Whitehead said one of WASO’s main roles was “touching souls and enriching lives through music”, which drives its full-time program from its well loved Master series right through to its regional touring.

Mr Whitehead said the orchestra’s key performance indicators were based on the development of programs and the number of performances, all driven by the overarching goal of enriching lives and touching souls.

“How we measure the impact that we have is more problematic, but for us that vision really drives the values of the organisation and its focus, rather than a particular set of KPIs,” Mr Whitehead told WA Business News.

For Mr Whitehead, however, the performance by WASO’s brass ensemble at Castlereagh School, a purpose-built special needs school, was one of the highlights in social inclusion for WASO this year.

Workshops and individual tutorials were held for the students and the feedback WASO received from the school’s principal was that the level of interaction and response from the students to the music was “unanticipated” and “close to unprecedented”.

“It is hard to quantify what kind of impact we have when we went to Castlereagh other than to know how we felt when we walked out the door, to see the faces of the students during and following the performance, to see and feel the emotion from the principal and the carers about the experience they had,” Mr Whitehead said.