In the midst of Perth’s second major arts event this year, the city and local businesses are set to reap the economic rewards long after box office sales are tallied. 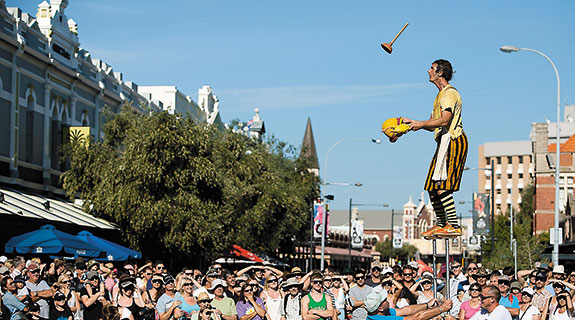 In the midst of Perth’s second major arts event this year, the city and local businesses are set to reap the economic rewards long after box office sales are tallied.

Western Australians are embracing the feast of culture and arts events offered up by the annual festival circuit, with a long list of local and international acts helping to bring significant economic benefits to the state.

This year’s Fringe World festival attracted more than 600,000 people to free and ticketed events, and recorded box office sales in excess of $6.2 million.

The festival almost doubled in size from 2014, which was due in part to expansion into the suburbs of Fremantle, Midland, Scarborough, Mandurah and Victoria Park.

Throughout the 2014 Piaf, 3,528 hotel nights were booked and there was a 22 per cent increase in the number of interstate and international visitors at festival events.

This year’s Piaf attendance, however, is expected to considerably exceed last year’s figure, with The Giants providing a healthy boost, not only to attendance numbers, but also the economic impact in the CBD.

More than 1.4 million people filled City of Perth streets over three days last month for the opening performance of Piaf, The Incredible and Phenomenal Journey of the Giants, by French arts group Royal de Luxe.

The cost of the show was around $5 million, which was covered by government and private sector support.

Chamber of Commerce and Industry WA chief economist John Nicolaou told Business News some cafe and restaurant business owners in the CBD had told him The Giants weekend was their busiest on record.

However, he said the real benefit of such festivals lay in the long-term economic impact.

“While I think there would be a very strong return on investment for both the Fringe and the International Arts Festival in the short term, for me I think it’s the long-term benefits that are going to be more meaningful to the extent that it builds on our reputation,” Mr Nicolaou said.

Fremantle Street Arts Festival director Alex Marshall agreed that while there was a significant benefit to most businesses in Fremantle during the event over the Easter long weekend, the focus was on developing the cultural destination in the long term.

He said events such as the Beaufort Street Festival and the recent visit of The Giants had changed people’s thoughts about what arts events could do for business.

The Fremantle festival previously recorded an economic impact of around $2 million for the 2012 event, based on research using data estimates and survey results.

Mr Marshall said he expected to see a significant increase on this figure for the 2015 event, with 25 high-calibre local and international street artists on the bill.

Mr Nicolaou said while Perth had always been seen as a city of economic importance with its resources sector dominance, it was growing its cultural identity as well.

“The long-term benefit is that you have a city that becomes more diversified over time ... we have seen investment and increased levels of activity in culture and arts,” he said.

“I think as the state’s wealth increases as the population grows you will see that transformation continue and that cultural identity will continue to grow; that’s something that I see as a real opportunity for Perth.”

These diverse benefits from festivals are not only felt within businesses and arts organisations, however; local artists are able to develop their profession and market themselves internationally on the back of a successful festival performance.

The City of Perth provided more than $70,000 to Fringe World this year and Lord Mayor Lisa Scaffidi said events like Fringe provided an environment where artists could exchange ideas, and experience new work, which ultimately contributed to the development of the local arts industry.