Broome-based artist Helen Norton has combined an entrepreneurial and adventurous spirit with her artistic skills to forge a successful career over the past three decades. 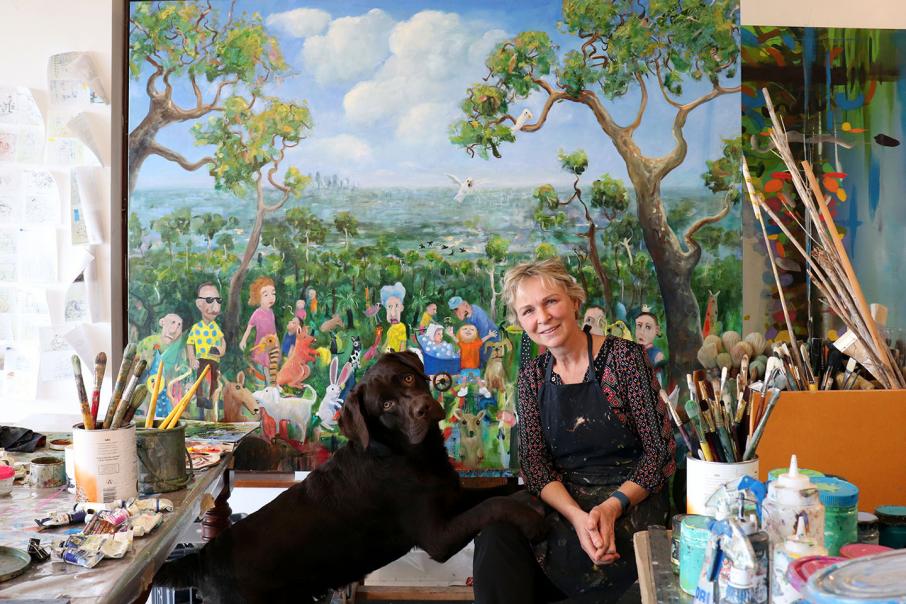 Helen Norton says dogs are a counterbalance to the complications of human lives and is inspired by the work dog refuges undertake.

Broome-based artist Helen Norton has combined an entrepreneurial and adventurous spirit with her artistic skills to forge a successful career over the past three decades.

Having left her city home at 16 for the more remote locations of Australia, including the Kimberley and Pilbara, Ms Norton said she was primarily an adventurer at heart and art followed as a means of expressing her stories.

About 30 years on from picking up the paintbrush, Ms Norton is represented in collections nationally and internationally, and has held more than 60 solo exhibitions.

Meanwhile, she has paid off the mortgage on her house, put her children through high school and their post-school studies – all as the family’s sole breadwinner.

“I’ve run framing factories within my business, I’ve had people employed over the years, I’ve owned galleries, I’ve owned about seven, so I’m very proactive about treating myself as a businessperson,” Ms Norton told Business News.

“I’ve been very entrepreneurial in actually pushing, and the most money I’ve made hasn’t been through those businesses, it’s actually been through my painting.”

Ms Norton said she hadn’t always seen eye to eye with the traditional art community, which recognised art and business as separate entities, at times evoking scrutiny from her peers.

However, Ms Norton’s commercial success has enabled her to use art as a means to assist the animal charities she’s most passionate about.

“I focus on the dog refuge homes; they do incredible work and find homes for 1,500 dogs a year. I’m really inspired by that and it’s so easy for me to give, but it makes such a difference,” Ms Norton said.

Ms Norton’s current collection of works, ‘Dogs’ Lives’, was recently exhibited at Heathcote Cultural Precinct and is currently showing at Applecross Art and Framing until July 1.

Following the exhibition, which will be officially opened by Red Dog producer Nelson Woss, paintings will be auctioned with proceeds put towards the Dogs’ Refuge Home in Shenton Park, which receives no government funding for its work.

“Some people think, ‘It’s a working dog, it just sleeps out the front with a lamb leg’, while another dog will be carried in a woman’s handbag, so we have all these different perspectives about what dogs are for,” she said.

Ms Norton said she adopted her first dog at the age of 16 during a trip across the Nullarbor, and has owned dogs ever since.

“Dogs are the simple counterbalance to the complication of human existence,” she said.