Artist in residence with Aliesha Mafrici

Emerging printmaker and sculptor Aliesha Mafrici has attracted high-profile attention at home and abroad since undertaking a major in visual arts at Edith Cowan University. 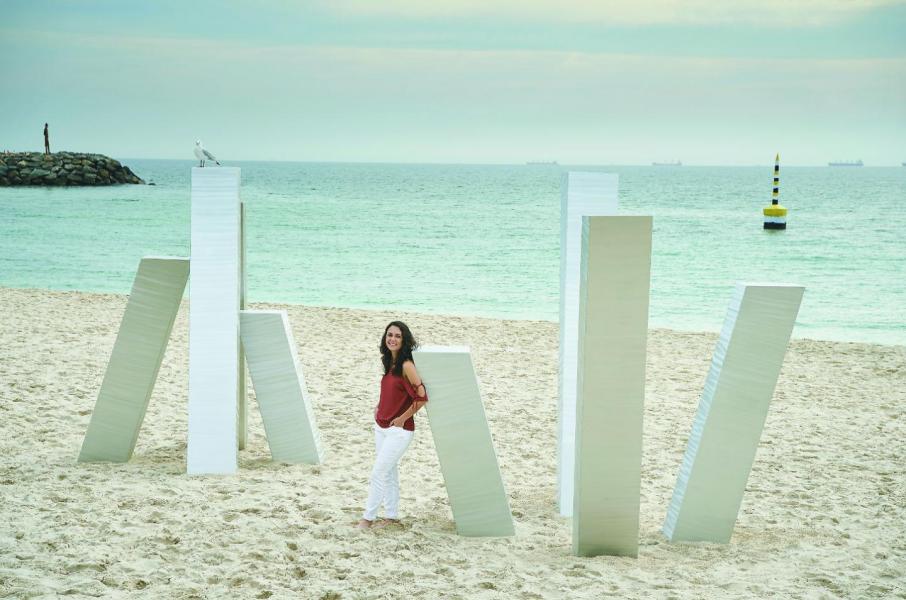 Aliesha Mafrici with ‘Stasis III’ at Sculpture by the Sea Cottesloe 2017.

Emerging printmaker and sculptor Aliesha Mafrici has attracted high-profile attention at home and abroad since undertaking a major in visual arts at Edith Cowan University.

In 2015, aged 19, she was awarded the federal government’s New Colombo Plan student mobility grant, which allowed her to develop her artist skillset at Shanghai Publishing and Printing College. This, in turn, led to her work being exhibited at the China Academy of Art in Hangzhou.

But arguably Ms Mafrici’s most impressive achievement to date came when she was named a recipient of the Rio Tinto Young Emerging Artist Mentorship Program.

That recognition came for her first sculpture, ‘Immersed’, which was exhibited at Sculpture by the Sea Cottesloe in 2016 and later purchased by Andrew Forrest for $7,500 (for inclusion in his private collection).

“I submitted an application, not even dreaming of getting in, to Sculpture by the Sea with a university idea that I had … and I got accepted,” Ms Mafrici told Business News.

“A few months later I got a call to say that I’d been awarded the emerging artist scholarship.”

The Rio Tinto-funded scholarship provided Ms Mafrici with a $10,000 prize and a mentorship with an artist of her choice – local sculptor Ron Gomboc.

“I didn’t want to be the artist who didn’t understand their field.”

More corporate support came from Alcoa of Australia, which recognised Ms Mafrici’s potential by awarding her a subsidy of $2,500 and material sponsorship to go towards the creation of her second Sculpture by the Sea artwork, ‘Stasis III’, exhibited this year.

‘Stasis III’, which is welded and made from aluminium, is to be exhibited at Sculpture by the Sea in Bondi in October, where it will be on sale for $50,000.

In addition to her recent progress as a contemporary and abstract sculptor, Ms Mafrici has a background in traditional etchings on copper printmaking, which made up the body of her recent exhibition, ‘New State’, at Turner Galleries in Northbridge.

Ms Mafrici said a common theme flowed through her artwork across the various mediums.

Ms Mafrici’s ‘New State’ exhibition, in collaboration with painter Harrison See, distributes fragments of a poem across the titles of artworks to explore this subject.

“The show centres around the narrative of a man who’s searching through nothing to find purpose, and at the end after his quest he achieves what he set his mind to and he stares at the result and he stares back at himself and he sees no difference,” Ms Mafrici said.

When ‘New State’ closes on August 29, Ms Mafrici will exhibit a series of monoprints as part of a group exhibition titled ‘On the Map’, from September 15