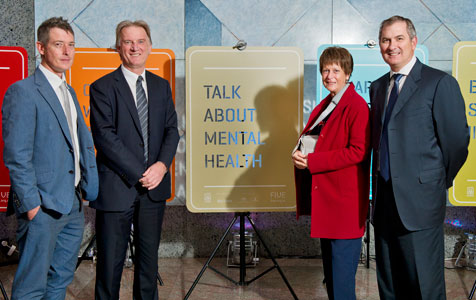 Mining giant Rio Tinto and not-for-profit group Disability in the Arts, Disadvantage in the Arts Australia (DADAA) have launched a partnership aimed at helping regional communities overcome the stigma of mental health.

The townships of Paraburdoo, Busselton, Derby, Geraldton and Esperance will each become involved in the project over the 24-month period, with Paraburdoo already making progress on its public sculpture creation.

DADAA offers tailor-made creative programs to support people with a disability or mental illness and also aims to use art as a medium for changing social attitudes.

Based in Fremantle, DADAA is also responsible for the tactile tours offered to people with disabilities at the annual Sculpture by the Sea exhibition in Cottesloe.

The FIVE project seeks to manage the negative impact of social isolation experienced by people living and working in remote areas.

DADAA executive director David Doyle said the pilot project was just the first step in improving the mental welfare of such people.

"The launch of FIVE is the start of a journey to address complex mental health needs across a range of settings in Western Australia," Mr Doyle said.

"Community arts and cultural development projects that are designed to generate dialogue around important issues and allow for self advocacy can help address the long-standing challenge of stigma around mental health – especially for isolated communities."

Experienced DADAA artists will oversee the artistic creations that will enable fly-in, fly-out workers, indigenous people, farmers and other members of these communities to come together.

The participants will be also able to document their progress and share their experiences via an online portal to enable further communication and interaction.

Murdoch University will monitor the inaugural program to evaluate its effectiveness and measure the impact that arts and culture can have on mental health.

"Rio Tinto acknowledges the increases in mental illness reported through the health sector and, as one of the largest employers, this inevitably involves our people too," Mr Gollschewski said.

"So we are taking a more proactive and coordinated approach to address the challenge across our business."

Rio Tinto has also announced another partnership with Artsource, the state's peak body for visual artists.

Indigenous artists in these areas will be offered professional opportunities as well as access to targeted mentoring.