Argyle losing at the margins

A dispute over the future of the failed Ellendale mine might not be the worst event in the downturn hurting the state’s once-brilliant diamond industry, because the much bigger Argyle mine is also facing a fresh threat to its future. 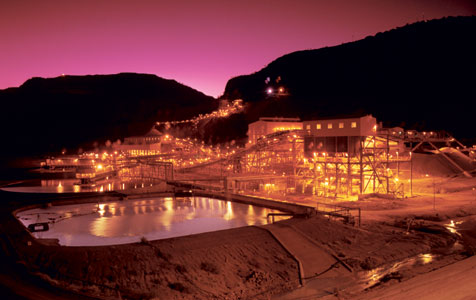 Rio Tinto's Argyle diamond mine in the Kimberley.

A dispute over the future of the failed Ellendale mine might not be the worst event in the downturn hurting the state’s once-brilliant diamond industry, because the much bigger Argyle mine is also facing a fresh threat to its future.

A collapse in diamond prices has forced Argyle Diamonds’ owner, Rio Tinto, to temporarily stop final processing of gems and cut its expected annual rate of production from 20 million to 18 million carats.

Not revealed by Rio Tinto in a brief statement about Argyle in its third-quarter production report was the effect of the reduced output on the financial performance of the mine, where a $2 billion upgrade was recently completed, including the development of underground mine to replace the original open pit.

History, as well as the latest downturn in diamond prices, is weighing heavily on Argyle; a project that Rio Tinto tried unsuccessfully to sell until last year when it withdrew the mine from the market after failing to attract acceptable offers.

The primary reason for not being able to get rid of Argyle was because the mine had become a marginal business, though Rio Tinto has never publicly revealed just how marginal.

Buried in that document (page 76 to be precise) is a statement that both the Ellendale and Argyle mines were facing “tight or non-existent margins”.

In other words, neither mine was particularly profitable; and in the case of Ellendale, it can now be seen that it was losing heavily in the period up to its closure and then a spectacular corporate collapse, with ensuing legal arguments about who knew what, when.

Ellendale’s troubles might not be a surprise but the performance of Argyle is, because according to the state government report it has been under far greater pressure than anyone outside Rio Tinto realised – and will be under even more pressure today as diamond prices continue to fall.

What the state government’s ‘royalty rate analysis’ report revealed is that Argyle has not been earning profits for some time, as the following extract from a section dealing with diamonds demonstrates: “Rio Tinto submitted to the review that Argyle has recorded material losses in five of the last six reported years”.

There is always scope to debate the definition of profit, such as whether it’s before or after multiple layers of financing and other accounting charges.

It’s also possible that Rio Tinto was pleading losses to strengthen its case for relief from government royalties, which the government granted to help with the underground phase of the mine.

What the admission to the royalty review also appears to reveal, however, is that all of whatever skinny profits Rio Tinto has earned from diamonds may have come from the company’s Diavik mine in Canada, which produces high-quality gems, whereas most of Argyle’s material is rated as ‘industrial’ and used in drill bits or concrete cutting saws.

The heavily promoted, high-value, pink diamonds from Argyle are too few in number to make a significant profit contribution.

Unfortunately the latest downturn in diamond prices, caused largely by declining sales in China (where the government is frowning on luxury spending), has heaped fresh pressure on Argyle and other diamond producers.

Last night, the share price of Anglo American, owner of the world’s biggest diamond business, De Beers, dropped sharply in London because of concern about falling profits from diamond mining and marketing.

Like Rio Tinto, which is withholding finished product from the market, De Beers is also stockpiling gems, with Anglo American expected to reveal in its third-quarter report, due to be released later today, that diamond output has been cut by around 10 per cent.

Diamonds have always been a tricky commodity subject to the regular rise and fall of consumer sentiment. When people are feeling rich, they buy diamonds. When they’re feeling poor, like now, they stop buying. And in China, they stop when the government tells them to.

What really makes the future of Argyle look less than dazzling is that, about 30 years ago, De Beers’ senior management warned Rio Tinto that Argyle was unsuitable for an underground mining.

At the time, De Beers was the marketing agent for Argyle gems and intimately familiar with the low grade of most of the material being mined, prompting its advice to forget about digging deeper because it believed the mine could not be profitable in a price downturn.

Rio Tinto, which was engaged at the time in a war of words with De Beers, ignored the advice and spent $2 billion going underground.

Now, Rio Tinto has a marginal business in a market oversupplied with gems, and a big customer (China) that has ordered its citizens to stop buying diamonds.

Diamonds might be forever, but not necessarily for WA.