SPECIAL REPORT: World-class entertainment infrastructure is proving to be one of the keys to Perth’s growing maturity as a globally significant city. 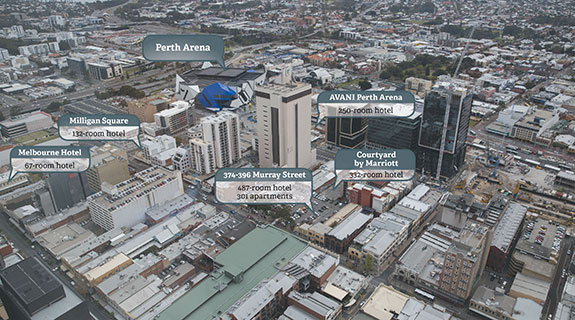 DRAWCARD: The proximity of Perth Arena is expected to be a selling point for five new hotel proposals. Photo: Attila Csaszar

SPECIAL REPORT: World-class entertainment infrastructure is proving to be one of the keys to Perth’s growing maturity as a globally significant city.

Perth Arena was a highly controversial and divisive issue during its construction.

Whether people didn’t like the design or were upset with the state government regarding the project’s cost blowout, from a (grossly inadequate) $160 million to $568 million, Perth residents just didn’t seem to be convinced that the arena was needed.

Now, three years after it was completed, Perth Arena is attracting the world’s hottest stars and has been ranked among the globe’s best venues of its size, while the positive economic effects of the facility are flowing across the city.

A walk through the CBD or Northbridge on an event night clearly shows the benefits the arena has generated; small bars, taverns and restaurants are filled with patrons grabbing a bite to eat or a drink before or after a show.

A Committee for Perth case study into the arena showed the facility attracted 575,036 people between 2012 and 2013, while it was estimated that Perth Arena created an economic benefit of more than $200 million per year.

All five of those hotels are being developed by international groups, with: Singaporean conglomerate Fragrance Group advancing proposals on Murray Street and on Milligan Street; Roxy-Pacific Holdings seeking to build a Courtyard by Marriott on Wellington Street; and a private Singaporean developer financing a 67-room hotel build at the Melbourne Hotel.

The fifth hotel will be an upscale Avani-branded property, financed by Bangkok-listed Minor International, to be built right next to the arena; it’s expected to be marketed as the lodging of choice for international performers and tourists alike.

Place Match director Lisa Montgomery said the arena had been one of the key elements in the revitalisation of the CBD and Northbridge as safe entertainment districts.

“It’s really the visitor experience it offers, the quality of experience and the night out element for Perth,” Ms Montgomery told Business News.

“But the effects have probably only just really started to be seen.

“It’s still early days in terms of its longer-term potential and the ongoing evolution of the city’s western end.

“When the balance of the City Link and Kings Square is complete, the arena will have a fundamental anchoring role going into the future.”

The new sports stadium at Burswood is expected to bring even more of an economic benefit than Perth Arena.

A Tourism Council WA study released earlier this year showed the total yearly economic output of the stadium would be $291 million, while 1,390 full-time jobs would be created.

The stadium is also facilitating significant development in surrounding areas.

Hotelier Crown is upgrading its facilities with a $568 million, 500-room new hotel, with its associated amenities, restaurants, and bars expected to be filled by patrons before and after major events at the stadium.

Complementing Crown’s facilities will be a new commercial precinct among the parklands on the Burswood Peninsula, according to the state government’s Perth Stadium management plan.

The plan outlined opportunities to develop cafes, restaurants, health clubs or equipment hire businesses to activate the precinct year-round and outside of event times.

The stadium is also a key drawcard for Golden Group’s Belmont Park redevelopment plan, where it is expected to launch marketing for between 977 and 1,500 apartments by the end of the year or in early 2016.

The first phase of Belmont Park is also expected to have a significant hospitality aspect, which will provide a range of additional pre and post-event food and beverage options for stadium goers.

Ms Montgomery said while there would be significant amenity surrounding the stadium and at the Crown Resort, she expected the economic benefits to flow to other areas, facilitated by the transport infrastructure being created as part of the stadium build.

“It’s just as important to look broadly across the role it plays in the whole of city experience,” she said.

“The beauty of the stadium is it will have the localised opportunity, but the effects will probably also be felt quite far afield.

“Through the transport connections and the location, the flow on effects will be felt well into areas like Victoria Park and East Perth.

“It will have a dual benefit I imagine.”