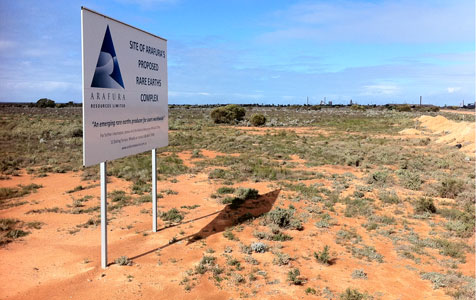 The proposed site for the chemical processing facility at Whyalla.

Rare earths miner Arafura Resources has shelved plans to build a chemical processing facility at Whyalla in South Australia, saying relocating the proposed plant to its Nolans Bore project in the Northern Territory could save it as much as $1 billion.

Arafura made the announcement to the ASX this morning, saying a challenging business environment had forced it to implement significant cost-cutting measures.

The key cost cutting measure is moving the proposed 20,000 tonne per year rare earths processing facility from Whyalla, to closer to the project site in the Northern Territory.

The miner said relocating it’s the processing operations would save around $160 million in capital expenditure, and up to $1.60 per kilo of rare earths in operating costs.

The move, however, could cost around 1,000 construction jobs and 300 permanent positions in Whyalla.

Arafura said it would retain its interest in its Whyalla site, pending a final decision on the extent of plant relocation.

Other significant cost-savings from the move would be simplifying of the project’s  transport and logistics component, Arafura said.

Arafura also said exploratory drilling around the Nolans project had identified an extensive aquifer system, which it believes could provide a water supply for processing facilities and potable water for the life of the operation.

In total, Arafura said it was targeting cost savings of between $500 million and $1 billion over the entire project.

“Relocating the intermediate chemical processing element of the project close to the mine site will create substantial and material significant savings for the project and mitigate risks related to transport and logistics,” Mr Kowalick said in a statement.

“In addition, we are continuing to focus on keeping project costs to a minimum and have set an aggressive yet achievable target to reduce capital costs by up to $1 billion.

“Our aim is to develop and deliver a successful and profitable project within an acceptable timeframe.”