Continued growth of the Pilbara as an export-focused iron ore province received a huge boost today when Chinese steel giant Baosteel and Australian railway operator Aurizon teamed up to bid for the Perth company behind a $6 billion port and rail project. 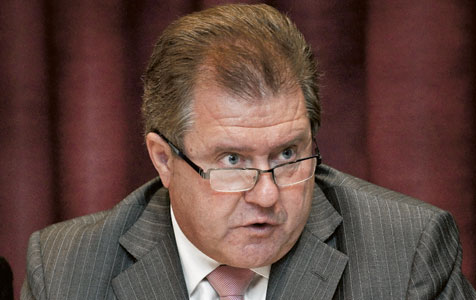 Continued growth of the Pilbara as an export-focused iron ore province received a huge boost today when Chinese steel giant Baosteel and Australian railway operator Aurizon teamed up to bid for the Perth company behind the $6 billion Anketell port and rail project.

The surprise offer for Aquila Resources values the company at $1.4 billion, though Baosteel already holds a 19.8 per cent stake.

The unsolicited offer was pitched at $3.40 per share, a nearly 39 per cent premium to Aquila's last closing price of $2.45.

On the same trip, the premier met with executives from another Chinese giant, CITIC Group, which is eyeing the Oakajee port and rail project in the Mid West.

The Aquila takeover offer injects new life into its ambitious Pilbara project, which has been largely inactive since 2012 when Aquila was unable to agree on funding arrangements with its 50:50 joint venture partner, AMCI Pty Ltd.

Aurizon, which has held talks over the past year with several Pilbara iron ore producers, notably Atlas Iron, said it was targeting the development of new multi-user rail and port infrastructure.

Specifically, it plans to build a 432-kilometre railway to Anketell Point, near Dampier, where it wants to develop a 40 million tonnes per annum port.

Aurizon and Baosteel are targeting first shipments of ore in 2017-18.

The rail and port projects have previously been costed by Aquila (through its API joint venture) at $5.5 billion, plus "EPCM, contingency and owners' costs".

Construction of the associated mines would take the total cost well above $6 billion.

Development of the multi-user infrastructure would open up new options for mid-tier miners with ‘stranded’ deposits.

The takeover offer is conditional on the bidders acquiring at least 50 per cent of Aquila.

It has been structured so that Aurizon will hold either 10 per cent of 15 per cent, with Baosteel holding the balance.

"This offer is compelling and provides Aquila shareholders with a unique opportunity to realise certain value for their Aquila shares," Aurizon executive chairman Lance Hockridge said.

"This cooperation represents a co-investment by Australia's largest rail freight operator and one of China's leading iron and steel producers to develop quality Australian resources, with potential to develop a new world-class iron ore district in the western Pilbara, supported by an integrated multi-user rail and port solution and to create Australian jobs, boost national exports and delver to government significant royalty revenue."

Aquila, led by chairman and major shareholder Tony Poli, will form an independent board sub-committee to evaluate the proposal. It has appointed Goldman Sachs and King & Wood Mallesons as its advisers, with Cannings Purple handling communication.

Aurizon said it did not intend to be a long-term shareholder in Aquila.

Instead, it envisages being the majority shareholder in a separate infrastructure company holding the rail and port assets.

A separate company would hold the mine assets, with Aquila and AMCI potentially remaining as shareholders.

Aurizon has engaged Satori Investments and UBS as financial advisers and Ashurst as legal advisers.

Baosteel has engaged Deutsche Bank and Minter Ellison as its advisers.

The financial muscle for the proposed deals comes from Baosteel, which in 2009 invested in Aquila via a strategic placement.

It also entered into a memorandum of strategic cooperation in regard to Aquila's projects.

While the Pilbara iron ore project is Aquila's principal asset, it also holds a number of coal and manganese assets in Queensland and Africa, which would also be attractive to Baosteel.

The state government last month signed a native title agreement with the Ngarluma people of the Pilbara over land intended for the deepwater port at Anketell Point.

The agreement covers 4,300 hectares of coastal land about 30km east of Dampier and includes a settlement package of $20 million over nine years.