Aquila Resources’ share price has stabilised at just below its $3.40 per share takeover offer, indicating the market is backing Baosteel and Aurizon to succeed with their $1.4 billion takeover. 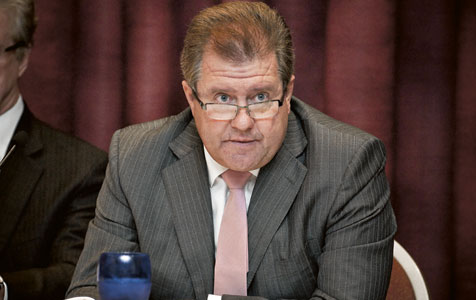 Aquila Resources’ share price has stabilised at just below its $3.40 per share takeover offer, indicating the market is backing Baosteel and Aurizon to succeed with their $1.4 billion takeover.

The Aquila Resources committee set up to evaluate the $1.4 billion takeover offer from Baosteel and Aurizon has recommended shareholders accept the bid despite an independent expert’s report released late Friday finding it to be unfair.

Grant Samuels and Associates valued Aquila at between $3.90 to $5.24 per share, which is significantly higher than Baosteel and Aurizon’s offer price of $3.40.

While the corporate advisory group deemed the offer “unfair”, because Aquila had no “clear path forward to financing and developing West Pilbara” – the company’s flagship project, which is expected to cost up to $8 billion to develop – the offer was considered “reasonable”.

It also found that Aquila does not have the financial or other resources needed to develop its other assets, including its Eagle Downs coal project.

Grant Samuels said given this, in addition to lower iron ore prices, shareholders were likely to be better off if they accepted the offer.

The committee set up to evaluate the takeover bid, which is led by Aquila executive chairman Tony Poli, said shareholders should accept the offer in the absence of a superior proposal.

The takeover is set to go ahead after Mr Poli, who holds a 29 per cent stake in the company, backed the deal.

In addition to the bidder’s 21.9 per cent Aquila shareholding, the takeover will have more than 50 per cent shareholder support.

Minerals Resources set out to trump Baosteel and Aurizon’s bid earlier this month after it purchased a 12 per cent stake in Aquila at $3.75 a share.

Mr Poli said he had been in discussions with Minerals Resources, which was contemplating an off-market takeover of Aquila.

Minerals Resources offered Aquila shareholder an all-scrip takeover deal, as opposed to Baosteel and Aurizon’s cash deal, that would have valued the target’s shares at $3.75 each.

Mr Poli said he had ceased discussion with Minerals Resources after the companies could not agree to terms that were acceptable to both parties.

Aquila’s share price jumped as high as $3.67 a share following the news that Mineral Resources bought a major stake in the company.

However it dropped to $3.06 a share just days later when Baosteel said it would not increase its takeover offer for Aquila. It closed today's trade unchanged at $3.37.

Aquila shareholders have until July 11 to respond to Baosteel and Aurizon’s offer.