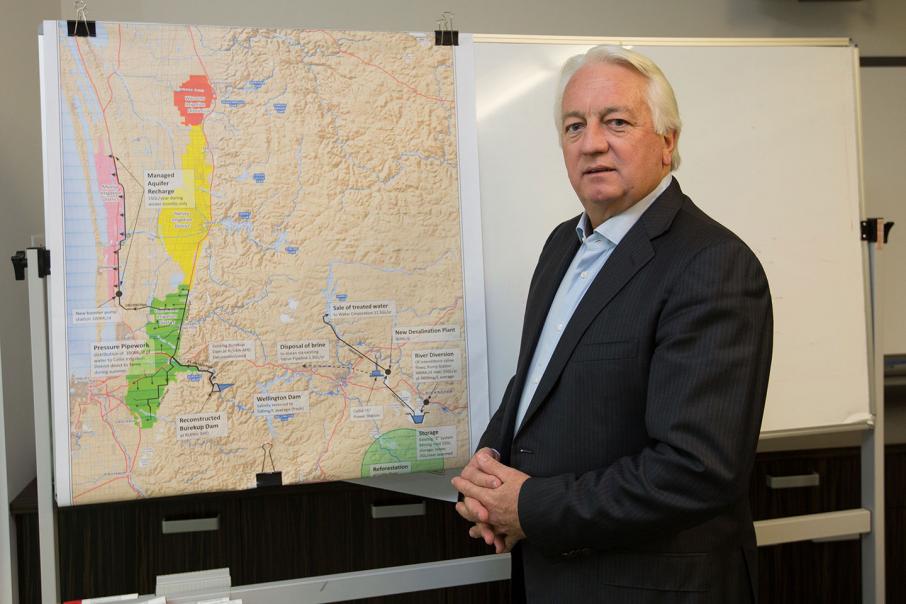 CLEAR PLAN: Peter Fogarty is seeking a solution to salinity at Wellington Dam, in the South West. Photo: Attila Csaszar

Peter Fogarty is a serial entrepreneur with an unusually diverse resume.

A lawyer by training, he ran global technology company ERG in the 1990s, has built Fogarty Wine Group into one of the state’s largest wine producers, leads corporate advisory firm Pendulum Capital, and for the past five years has been quietly building water business Aqua Ferre.

Its initial focus was a water supply project in the Chittering Valley that will pave the way for new residential subdivisions and a major logistics and industrial hub.

However there’s a much bigger opportunity in the state’s South West, where Aqua Ferre could hold a solution to the decades-old salinity problems at Wellington Dam – the state’s second largest after the Ord River Dam.

High salinity levels mean much of the dam’s annual allocation of 85 gigalitres is not utilised. 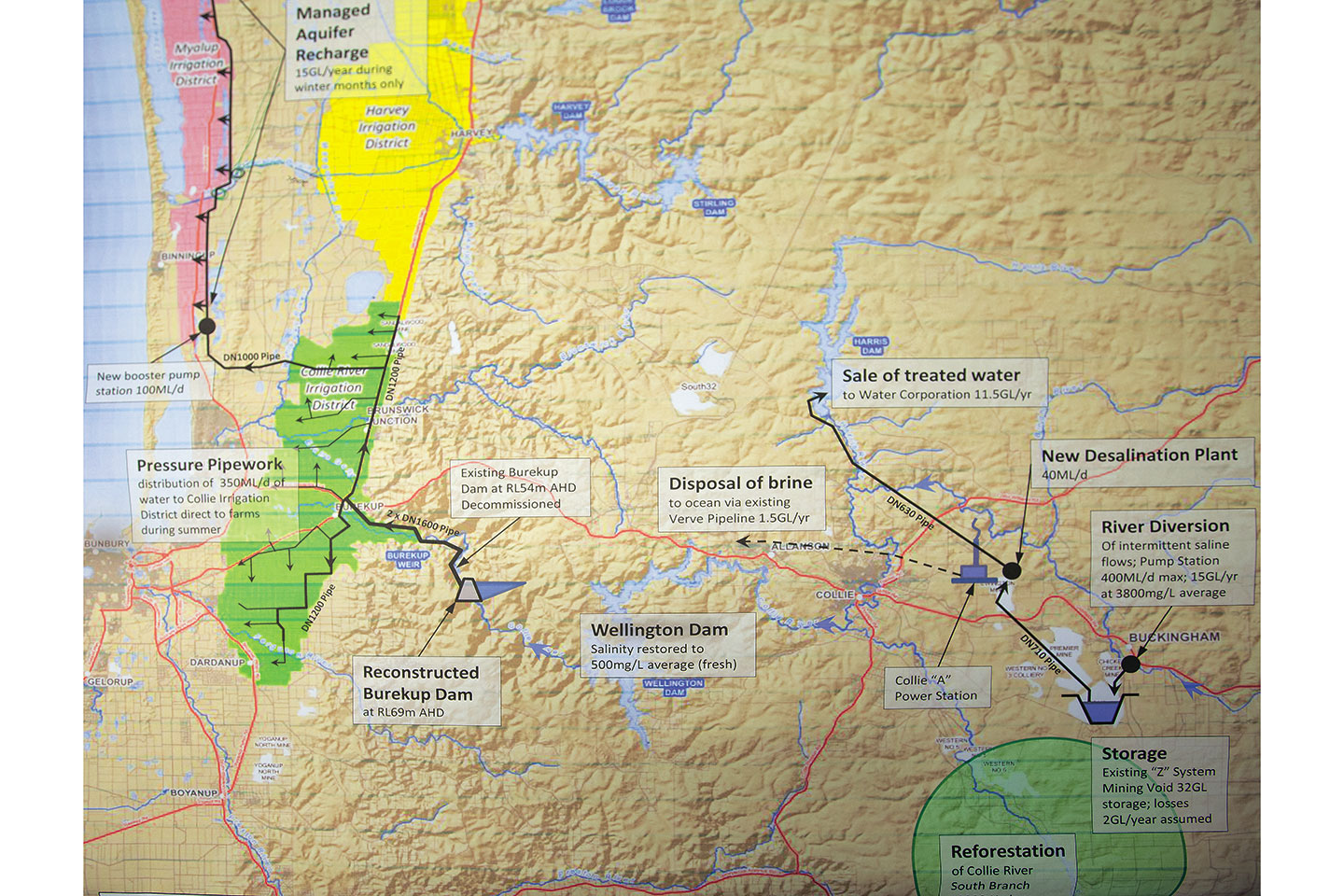 SALINITY: The Collie Water project is designed to reduce salinity in Wellington Dam, with the water to be fed via Burekup Dam to farmers in the Collie River (green shading) and Myalup (pink) districts.

Aqua Ferre has brought fresh thinking to the problem, which has produced hundreds of government-led studies and proposals over 30 years.

“We went back and researched all the history and asked why someone hasn’t fixed up Wellington Dam, it just doesn’t make sense,” Mr Fogarty told Business News.

“We thought, maybe they’ve approached it the wrong way.”

Aqua Ferre has partnered with farmers’ cooperative Harvey Water, which has run the Waroona, Harvey and Collie River irrigation districts since 1996.

Following an expression of interest process, their jointly owned company, Collie Water, was selected by the state government this month to coordinate a full feasibility study, funded by $1 million from the federal government.

“I think the (state) government was pleasantly surprised that we were so advanced with a much broader proposal than anyone else,” Mr Fogarty said.

Aqua Ferre got to this point by bringing together a diverse group of stakeholders, including coal miners Yancoal Australia and Lanco Infratech, power utility Synergy, the Water Corporation, Worsley Alumina, and dozens of downstream farmers.

“The whole process was a bit like a game of chess,” Mr Fogarty said

Mr Fogarty estimates his proposal will cost between $300 million and $400 million over five to seven years, with about half that to be spent on pipelines.

Private investors were already lined up for the project, but their plans could not be finalised until state and federal government funding was allocated.

Mr Fogarty said he was aiming for a final investment decision by the end of the year.

He believes the estimated cost of the project is a lot less than many earlier proposals, which advocated building a desalination plant below Wellington Dam.

Aqua Ferre’s solution starts by diverting the saline water that flushes down the Collie River each spring into coal mine voids.

It will be blended with water from mine operations and then treated in a 22GL desalination plant.

The treated desal water is to be sold to industrial users, which could include Worsley Alumina and Bluewaters power station, and the Water Corporation.

The diversion means salinity in the dam is expected to fall quickly, to a point where the water is suitable for agriculture.

“We asked, ‘what is the smallest volume of water you can treat, to get good quality water?’” Mr Fogarty said.

“And so you go back to the source.

“About 10 to 15 gigs of water are causing all the problem.

“Our approach was cut that water off, don’t let it get into the dam, and then treat that water.”

The Collie Water consortium is working with Israel’s IDE Technologies and Spain’s Valoriza on planning for the desal plant.

“If you just do it for farmers in the Collie River irrigation area, it doesn’t stack up,” Mr Fogarty said.

“Everyone is underestimating how critical that Myalup area is.”

His company, Regal Grange, supplies seed to Myalup farmers and his connections enabled him to secure letters of intent with the Collie Water consortium from most growers.

To avoid the need for expensive pumps, the consortium plans to build a taller wall at Burekup Weir, to enable water to be stored and gravity-fed via 200 kilometres of pipes.

In the Collie River irrigation district, the pipes will replace open channels that currently lead to the loss of 13-16GL each year through evaporation and leakage.

The water will also be gravity-fed across to Myalup to recharge the underground aquifers and eventually supply farms direct.

This will bolster the Myalup horticulture industry, which is being adversely affected by extraction limits and deteriorating water quality.

“You have to find smarter ways of using your existing water; we’re in that business now.”

The ambitious plan addresses a problem that has troubled Harvey Water ever since the cooperative was established 20 years ago.

“When we walked in the door, the salinity issues at Wellington Dam were top of our list,” chief executive Geoff Calder said.

Mr Calder believes the current plan has merit because it brings together above-dam and below-dam solutions, but acknowledges there is no guarantee the plan will proceed.

“I’m still at the hopeful stage,” he said.

The appointment of the Collie Water consortium is a significant milestone in the state government’s Water for Food program, which is seeking to boost water supplies for agricultural projects across the state.

“This project could be transformational and potentially address water supply limitations at Myalup, one of our important vegetable growing districts,” Water Minister Mia Davies said.

Mr Fogarty said his investment was underpinned by long-term opportunities.

“Our agenda is bigger than a return on the water project,” he said.

“We see the real opportunity in agricultural pursuits using the water, we’re looking at several large agricultural projects with offtake contracts for offshore.”

Mr Fogarty hinted at one possibility, saying intensive greenhouse production could be established near Collie, using the available water plus excess heat and carbon dioxide from the power stations.

In the Chittering Valley, which includes the towns of Bindoon and Muchea, Aqua Ferre is planning a smaller but still substantial water supply project involving the extraction and treatment of underground water.

The project will underpin the supply of reticulated water for a proposed 240-lot residential development and will also supply the planned Muchea Employment Node, which includes Sirona Capital’s Northern Gateway industrial estate.