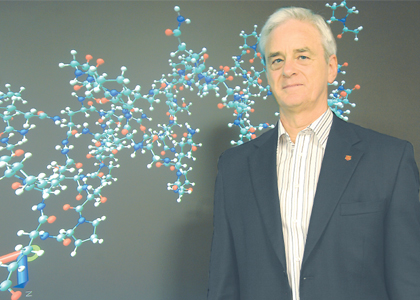 CODE BREAKER: Rudi Appels says the Australia-China Centre for Wheat Quality will one day give Australian farmers an advantage in selling wheat to China.

A NEW centre based at Murdoch University is aiming to do for wheat production what the human genome project has done for diagnostic procedures in medicine.

The Australia-China Centre for Wheat Quality is a newly formed research centre that brings together scientists from Australia and China in an effort to get a complete picture of the genes responsible for the various aspects of wheat quality.

Researchers hope they will be able to help breeders and farmers take advantage of shortfalls in Chinese wheat supplies, by being able to match the qualities required by Chinese millers with what Australian farmers are growing.

To do this, centre director Rudi Appels told WA Business News, the project would draw heavily on information already available through the International Wheat Genome Sequencing Consortium, of which he is cochair.

“There are about 100,000 genes in wheat, and we now have the data in hand to basically predict all of the proteins that are coded for by the wheat genome,” Professor Appels said.

Using this information, researchers at the centre will take advantage of new technologies to study the proteins from genes that contribute to the overall quality of the grain, such as colour, texture and taste, as well as disease resistance and climate adaptability.

Professor Appels said the short-term goal of the centre would be to identify and put a signature on the grain proteins from wheat already grown in Australia.

“These signatures based on the proteins are sort of like a fingerprint in humans, they’re all very distinctive,” he said.

“And we want to get the signatures for grain from Chinese wheats currently used to make the [products] that are consumed in China and then match what we grow in Australia to them.”

Over a longer timeframe, the centre hopes to be able to prepare the groundwork for developing new varieties.

“This is only a two-year program which is designed to lay a foundation for further work, so in the two years we have we hope to be able to identify new lines of wheat that are at a stage where we can tell breeders the genetic materials that will give them wheat lines to fit into particular niche markets in China,” Professor Appels said.

“But if they have a drop of only 1 per cent in production, that’s an opportunity for us to sell them a million tonnes of wheat.

“China only usually imports one or two million tonnes annually, so we would be wanting to say ‘look at the material we’ve developed, it’s a much better match for your needs in these specialty areas.’”

Finding for the centre was announced late last year as part of the 40th anniversary of diplomatic ties with China. Six joint research centres were established across a range of disciplines, and funding on the Australian side was matched by the Chinese government.

The centre received around $1 million in funding from the Australian government.

The centre will also draw on the resources of the recently established Australian Export Grains Innovation Centre.

“AEGIC will be able to tell growers in a particular season there’s potential for demand from China for this type of wheat as we anticipate there may be a fall in supply this season in China,” Professor Appels said.