Apartments, food and beverage to make Murdoch more than medical

Perth's next apartments and employment hub will be created at Murdoch, with Fini Group selected to deliver the $200 million first stage of LandCorp’s Murdoch Health and Knowledge Precinct. 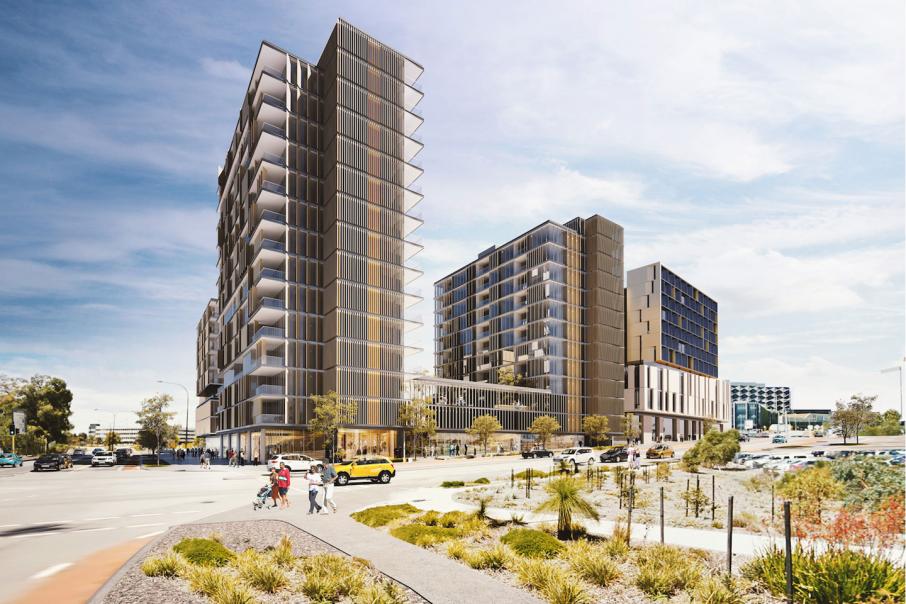 Perth's next apartments and employment hub will be created at Murdoch, with Fini Group selected to deliver the $200 million first stage of LandCorp’s Murdoch Health and Knowledge Precinct.

Fini Group has proposed to build 175 apartments and a significant food and beverage-focused community hub at the heart of the first stage of development at Murdoch, which will be located on a plot of land bounded by Barry Marshall Parade, Fiona Wood Road and Bedbrook Row.

Fini Group was selected from a shortlist of five developers, after LandCorp received 11 submissions for the Murdoch Health and Knowledge Precinct.

Aegis Aged Care Group has also partnered with Fini Group, to deliver a 150-bed aged care facility and a 60-bed medi-hotel, which will be designed to cater for patients recovering from treatment at Fiona Stanley Hospital or St John of God Murdoch.

In total, the project will comprise more than 50,000 square metres of floor space across five buildings between six- and 15-storeys in height, and have a build cost of around $200 million.

More than 10,000sqm of commercial, retail and amenity space has also been proposed, while 30 per cent of the apartments will be reserved for key workers such as nurses or carers, teachers or police. Development director Kyle Jeavons said the intent of the project, designed by international architecture group HASSELL, was to create a cultural hub and community meeting place for Murdoch.

“To achieve that, we need a pretty vibrant mix of retail and hospitality, certainly with strength on the hospitality side,” Mr Jeavons told Business News.

“Murdoch has the most train passenger movements outside of the CBD in Perth, so we really think there is a great opportunity to turn what is a commercial precinct at the moment into a very genuine village atmosphere, and build on the existing infrastructure with the hospitals and the train line that’s there now.

“It’s not unlike the Treasury building where we gave back almost half of the ground floor to the public; this is a good example where we are creating this extremely large public plaza that could otherwise be commercial space.

“Basically we’ve pushed all the buildings to the outskirts of the land and we’ve ended up with this fantastic internal plaza.”

A development application is expected to be lodged before the end of the year, while Fini Group plans to build all five buildings simultaneously, targeting a completion date of 2020-2021.

Mr Jeavons said Fini Group viewed the Murdoch precinct as an opportunity to demonstrate the positive outcomes that come with adding density in areas close to key infrastructure.

“We want this to be the catalyst that really educates the people of Perth that when density is done very well that it’s an amazing lifestyle, it’s a sustainable lifestyle and it’s a great way to live,” Mr Jeavons said.

“We see this not as a medical project – it’s a masterplanned community that sits on heavy rail infrastructure and between hospitals.

“This is the perfect example where we have employment, heavy rail and the opportunity to create density which will make the city a better place.

“That’s the reality that we look for – how to make sure we grow the community and create great projects that can be case studies and examples of how to do developments.

“I think this ticks those boxes, it’s much more than just a medical or health precinct.”

The state government said the entire Murdoch Health and Knowledge Precinct would be developed over the next 10 to 15 years, and to become a catalyst for the broader Murdoch Activity Centre.

The medi-hotel proposed at Murdoch is also one of several in the works for the state government, according to Health Minister Roger Cook.

Mr Cook said the development of medi-hotels would ensure high-cost hospital beds were freed up for those who need them most.

“Medi-hotels will help reduce waiting times in emergency departments, and waiting lists for elective surgery, by ensuring patients who are not ready to be discharged - but no longer need that high level of care - can recover in comfort, with family and loved ones close by in a convenient location,” Mr Cook said.

“Medi-hotels will be especially welcomed by Western Australians from regional areas, who often find themselves admitted for long periods for simple day surgery.