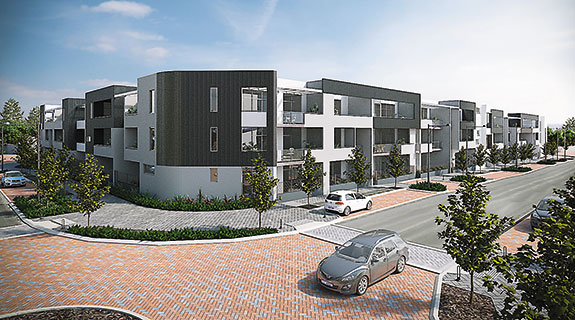 MID-RISE: An artist’s impression of the third stage of apartments at Peet’s Invita at Wellard.

Perth's biggest ASX-listed land developers are increasingly incorporating apartment developments into their plans, as the shift to smaller dwellings gains prominence in the outer suburbs as well as inner urban areas.

While the projects are not the high-rise builds typically seen near the inner city, Peet managing director Brendan Gore said the developer was increasingly seeking to create apartments and townhouses to complement single housing lots at the town centres of its estates.

Mr Gore said Peet had 1,700 medium-density apartments in its national pipeline, while at the end of the 2014-15 financial year had settled more than 450 apartments across its projects or joint ventures.

In Western Australia, Peet is incorporating apartments at The Village at Wellard, Shorehaven at Alkimos, as well as Golden Bay and Lakelands.

At Wellard, Peet is delivering 188 apartments over the first three stages of development, while the first tranche of 40 waterfront apartments at Alkimos is also being planned.

Mr Gore said the same principles that made apartment living attractive in near-city suburbs applied on the outskirts of the city.

“Location and convenience are crucial to the appeal of apartment living,” Mr Gore told Business News.

“The integration of city-style apartments into Peet’s masterplanned communities has been very popular, representing an extension of the traditional real estate offerings by providing greater variety in density and home styles.”

Mr Gore said he was also a believer in Perth being in the middle of a structural shift to apartment living, an ethos most often promoted by the state’s apartment-only developers.

He said the quality of apartments had contributed to their momentum, with new developments a very different style of living to the flats of the 1960s and 1970s.

“It is also proving popular with buyers wanting a low maintenance home and those keen on a lock-up and leave lifestyle, including travellers and Fifo workers.”

Fellow ASX-listed developer Cedar Woods Properties has also traditionally been a greenfields land estate producer, but is also incorporating apartments into its portfolio.

Early this year, Cedar Woods completed a joint venture with LandCorp and St Ives at the old Carine Tafe site, which yielded 110 townhouses and apartments.

Cedar Woods has also completed three beachfront apartment projects in Rockingham – Nautilus, The Jetty and Aria – with the latest of the projects, Nautilus, being completed in 2010.

The developer is also expected to incorporate a significant number of apartments into its proposed Mangles Bay Marina, which remains in the planning phases following state and federal environmental approvals being issued.

Outside of WA, Cedar Woods recently purchased a 16.5-hectare infill project in Adelaide, with the development expected to yield around 1,000 apartments or townhouses.

And it’s not only the WA-based land developers that are chasing apartment projects.

Frasers Property Australia, formerly Australand, has been one of Perth’s most prolific apartment developers, having completed 1,749 apartments (with an additional 1,282 in its pipeline).

The majority of that pipeline is at Port Coogee, where 700 apartments are planned to complement the existing single housing lots that have already been developed.

Frasers Property Australia WA residential general manager, Tony Perrin, said the developer was also looking closely at ramping up its integrated housing, or medium-density townhouses, delivery in the near future.

“We see integrated housing as a market that’s pretty immature in Perth and is likely to grow strongly, in addition to the pure apartment market,” Mr Perrin said.

National developer Stockland also has an apartment pedigree, having developed the $115 million The Islands at South Beach in 2009, a project that comprises four five-storey buildings.