Perth’s appetite for apartment living continued to increase in the last quarter of 2017, driven largely by new projects. 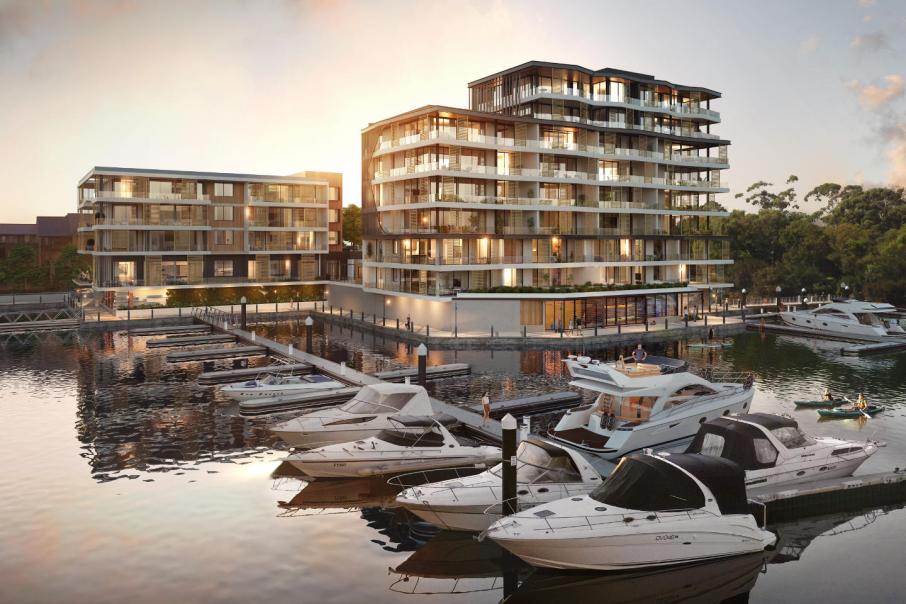 Perth’s appetite for apartment living continued to increase in the last quarter of 2017, driven largely by new projects.

Activity in the city’s new apartment market ticked up a notch late last year, with four of the seven top-selling projects launched in the December 2017 quarter, according to Urbis’s latest ‘Apartment Essentials’ report, released last week.

Sales increased by 20 per cent in Q4 to 348 in the Perth market, up from 276 sales in the September quarter, contributing to a total of $800 million worth of apartment transactions for 2017.

Urbis director of property economics and research, David Cresp, said 34 per cent (120) of sales were in presales projects.

“Considering only 16 per cent of actively selling projects in Perth are in presales stage, the success these new projects are having in the market shows there is a demand out there for new developments,” Mr Cresp told Business News.

Eight projects launched during the final quarter of 2017 and yielded 524 apartments, compared with the 163 apartments across three developments in the previous quarter.

Blackburne managing director and 2016 40under40 First Amongst Equals, Paul Blackburne, said 772 registrations of interest had been received for Marina East, with the project now 50 per cent sold.

Demand had mostly been for apartments in the $800,000 to $1.5 million range, he said, largely by owner-occupiers, especially downsizers seeking larger two- and three-bedroom apartments, with all four penthouses going to contract by mid-November.

This resulted in the developer amalgamating smaller apartments, with six new apartment designs released earlier this month, which Mr Blackburne said demonstrated a strong resurgence in the top end of the market.

Similarly, Urbis reported that demand for apartments of three bedrooms or more increased during the final quarter of 2017, accounting for 17.5 per cent of transactions, up from 9.9 per cent, but still lower than one-bedroom apartments, which represented 27 per cent of total sales.

Two-bedroom apartments contributed to the bulk of total sales.

Mr Cresp said the higher proportion of three-bedroom-plus sales, coupled with more expensive sales in the inner-city precinct, had resulted in the weighted average sale price for Q4 rising to $696,695.

Analyst firm Property ESP examined settlements from 2012-2017 and found that during this time there had been more than 1100 sales of three plus bedroom apartments in Perth, the bulk in East Perth (697 sales) but that sales for this segment had been declining, with 279 sales recorded in 2012 and 95 in 2017.

Property ESP managing director Samantha Reece said that, as had been witnessed in the eastern states, larger apartments were being closely held, and there was a need to increase the ratio of three bedroom apartments on offer in Perth.

"Data has shown that Perth is second to Sydney across the nation for the number of families residing in apartments," Ms Reece said.

"Plus, nationally only five per cent of our seniors in fact choose a retirement village when looking to relocate out of their traditional family home.

"Perth is evolving and people are choosing to reside in the city because of its strong employment base and vitality (as a result of improved infrastructure) and on that basis we need to reflect this in our ongoing housing options."

The report found apartment development approvals lifted slightly during the quarter, but still remained at a low level compared with the peak experienced in 2014-15.

Finbar Group had the largest market share of apartments under construction in Q4 with 543 (see table), followed by Fragrance Group and Far East Consortium. 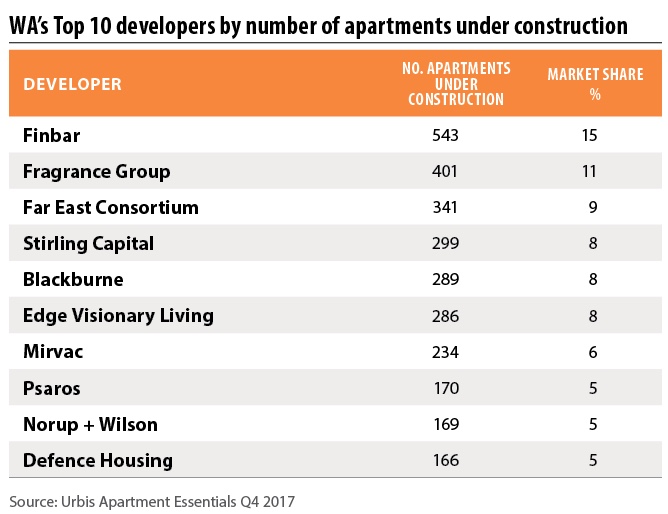 Finbar also topped the list of the top 10 apartment developers by the number of active apartments (those unsold at pre-sales stage through to completed developments) with 1,387 apartments on the market during Q4, followed by Edge Visionary Living (578) and Frasers Property Australia (555).

Mr Cresp said local sentiment towards the apartment market remained positive and was expected to continue into 2018.

“The Perth established market is already starting to see a recovery after the longest market downturn in more recent history,” he said.

Developers have already made a promising start to 2018, with three projects taking shape in February: Finbar released the first stage of its $342 million three-tower development in Applecross; Norup + Wilson was given the green light for its 99-apartment ‘Beach Shack’ in Scarborough; and last week LKD Development Group announced plans to start construction of its $40 million East Perth project next month.