Fresh analysis has shed new light on the long-running debate over whether Perth is heading for a glut of apartments. 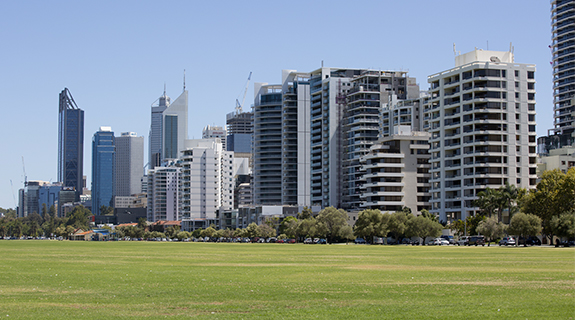 Fresh analysis has shed new light on the long-running debate over whether Perth is heading for a glut of apartments.

APARTMENT buildings in inner-city Perth have a lower vacancy rate than those in the broader metropolitan area, according to fresh research, with the figures helping dispel the notion that the market is in danger of oversupply.

And while 2015 is expected to be Perth’s most prolific in terms of apartment supply, with 1,613 high-density dwellings to be completed in the inner city, tight financing conditions, which require considerable pre-sales before a project is funded, will ensure that vacancy doesn’t blow out in the near term.

The Master Builders Association’s Western Australian division recently commissioned Y Research to create the inaugural ‘Perth High Density Apartment Report’, which covered the Perth CBD and the surrounding inner suburbs, from Canning Bridge and Como in the south to Highgate and Leederville in the north, while also spanning from Subiaco in the west to Burswood in the east.

In total, the report found there are 531 buildings containing 19,064 apartments in the study area, with 51.5 per cent of that stock having been constructed in the past 15 years.

Of that number, 731 were available to rent at the end of January, while 620 were up for sale.

Y Research chief problem solver Damian Stone said the apartment vacancy rate across the study area was 3.8 per cent, with some suburbs registering as low as 1 per cent vacancy, while the Real Estate Institute of WA’s latest update in early February showed all homes across the metropolitan area had a vacancy rate of 4.2 per cent.

Mr Stone said that, prior to compiling the report, there was no measure of how many apartments there were in the inner city and surrounding suburbs, which led him to question how anybody could say there was going to be a looming oversupply.

In addition to the low vacancy, Mr Stone said his research revealed just 1.65 per cent of Perth’s population lives in an apartment within five kilometres of the city, giving developers a deep pool of more than 98 per cent of the population to draw from to take up stock in their projects.

“Despite the record growth that’s occurred in WA, apartments represent just 15.7 per cent of the total dwellings under construction for the next year.

“The global trend is a shift towards high density, inner-city living and the Perth of 2020 will be more reflective of high density.

“The only way in the future is up.”

Mr Stone also recently released a similar report on apartment development across the entire metropolitan area, which showed the shift to high-density living was occurring at a faster rate than previous forecasts.

The development pipeline, as shown in Y Research’s Metropolitan Perth Development Report, includes 256 projects either under construction, approved for development, or in the planning process in Perth, with the potential to add 20,227 apartments by 2020.

Thirty-five projects reached pre-sales goals and commenced construction in just the past six months, while more than 10,000 new apartments have been approved or begun the process of seeking development approval.

Mr Stone said those numbers equated to 78 apartments being approved every day, with 18 per day commencing construction.

However, The Match Group managing director Lloyd Clark, who said the developer had experienced strong sales across its range of boutique projects, didn’t believe all the proposals that had been approved would proceed.

“The reality is that the apartment supply figures have been skewed by a number of large-scale proposals, some of which are backed by first-time developers,” Mr Clark said.

“Based on our knowledge, many of these will struggle to achieve the pre-sales required for bank finance and ultimately won’t proceed.

“There are definitely a number of large-scale project proposals, but a lot of them are just that, they’re proposals.

“As a result of all that, any apartment project currently under construction in Perth is generally backed by a strong level of local pre-sales.”

The approvals figures show a distinct shift in the scale of apartment projects being rolled out by developers, with Mr Stone’s research showing the 4,490 apartments are mooted to be in buildings of more than nine storeys.

But of the apartments currently being built, 2,871 are in mid-rise buildings of five to eight levels, and just 793 are in high-rise buildings.

Mr Stone said the economic slowdown had also resulted in developers looking to roll out more affordable products, with average prices for one-bedroom and two-bedroom apartments in the marketing stage more than 10 per cent cheaper than similar products currently being built.

“There is an understanding that with less FIFO workers and resources executives, other key markets, such as downsizers and first homebuyers, needs to be the focus,” he said.

“Discussions with developers and real estate agents note that while the sales rate has slowed, sales are still coming through with purchasers taking longer to commit to decisions.

“To achieve required pre-sales, future projects will need to have a strong point of difference in terms of price or location.”