Apartment developers are shrugging off concerns of oversupply in key markets, a slowing pre-sales environment and falling rental values, pushing on with plans for significant new projects, both in the CBD and suburban areas. 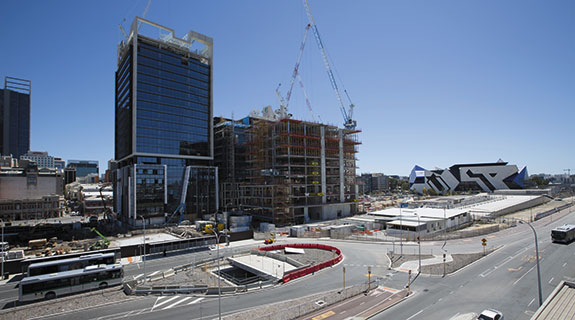 Apartment developers are shrugging off concerns of oversupply in key markets, a slowing pre-sales environment and falling rental values, pushing on with plans for significant new projects, both in the CBD and suburban areas.

The start of 2015 has been marked by a flurry of fresh projects in the apartments space, with two of the developments having the potential to redefine the list of Perth’s top 10 tallest buildings.

A 52-storey building, part of a three-tower development at the old Megamart site on Beaufort Street, was approved for construction by the City of Perth development assessment panel last week.

The project, put forward by Sydney-based development group EG Funds Management, will ultimately comprise 804 apartments across three buildings, with the largest tower set to be Perth’s fifth-tallest building if it proceeds.

Design works remain in the preliminary phase and it is not yet known how many apartments will be contained in the towers.

On the eastern edge of the CBD, Pindan Capital recently lodged a development application with the City of Perth for a 214-apartment project with an end sales value of around $100 million.

If the development is approved and sufficient pre-sales are achieved, Pindan is expected to begin construction by midway through this year.

Outside of the CBD, Westbridge Property Group has launched pre-sales for a $55 million, 91-apartment project located on the corner of Beaufort Street and Tenth Avenue in Inglewood.

The proposal is for two buildings on the former supermarket site, of five and three storeys.

The Gardens proposal comprises 34 apartments, while Mr Hay told Business News he expected a construction contractor would be appointed shortly, with a view to beginning works in April.

ABN Group is also advancing plans for a significant suburban project, however, its proposal to construct a 48-apartment building at the corner of William Street and Alma Road in Mount Lawley was sent back to the drawing board by the metropolitan west development assessment panel last week.

The new projects come at the same time rents are being negatively affected by falling population growth, particularly in the apartments sector.

The figures, released by the Real Estate Institute of WA, showed inner-city median rents were down $65 per week compared with the same time last year.

Business News also reported late last year that developers were increasingly being forced to slash prices or provide incentives to buyers to achieve sufficient pre-sales for projects to proceed.

Ms Chin said she expected the rate of sales to remain slow, especially in the first half of the year, which would have a knock-on effect to the number of new projects. .

“Some mooted projects may not enter the market, or may not reach the required pre-sales target, which will relieve some of the perception of an oversupply situation,” Ms Chin said.