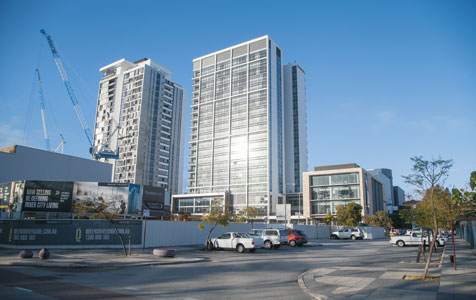 AT PACE: Perth is currently in the middle of an apartment building boom. Photo: Attila Csaszar

Apartment developers are rolling out stock at a cracking pace in Perth, potentially testing the limits of demand as they claim investors are returning to a market that increasingly reflects the city's maturity.

Since 2011, 13,557 multi-residential dwellings have been approved for construction in the metropolitan area, according to research by the Real Estate Institute of Western Australia.

But research released recently by apartment sales specialist MLG Realty showed that about 875 inner-city apartments set to hit the market in the June quarter, but in the 12 months to the end of March, there were just 896 sales.

While some of those 875 apartments are already sold but yet to settle, it is statistics like those that are cause for caution, according to Matthew McNeilly, managing director of private equity group Sirona Capital.

“There seem to be a lot of schemes starting to see the light of day, but overall there seems to be a pretty strong structural change going on in Perth,” Mr McNeilly told Business News.

“I think we’ve been underdone on apartments and apartment living for a very long period of time, and I don’t think Perth can continue its urban sprawl unabated.”

The comments conflict with the view expressed by Perth's biggest land developer, Nigel Satterley, who claimed the apartment market was overheated.

Despite a degree of caution, Mr McNeilly said Sirona was planning to be more active in the apartments space over the next 12 to 18 months.

Its first project is Heirloom at the old Fort Knox Building in Fremantle, which it is redeveloping in a joint venture with boutique developer Match Group.

Mr McNeilly said Sirona, through its Westbridge Property Group joint venture with Luke Saraceni, was also looking at a number of apartment projects across the metropolitan area at sites they had already identified and either already bought or had options to buy.

“I’m a believer in the structural change, so with the apartment market … we’re taking a long-term view on it,” he said.

Match recently launched a pair of syndicates collectively worth $9.5 million, to develop two sites in Leederville and Mount Lawley.

Mr Clark told Business News both syndicates had closed oversubscribed, which was a good indication of the increasing demand for apartment projects.

The group is also preparing to launch another syndicate for a site near Preston Street in Como, with plans to raise around $5.5 million to construct a mixed-use residential-commercial complex.

“We’re seeing more and more people really embrace apartment living and they’re recognising value in apartment living in areas surrounded by amenity and close to employment, rather than living miles out in an estate,” Mr Clark said.

“It’s definitely an emerging market, and it’s a maturing market.”

“The partners in Kuala Lumpur have always understood the strength of the Western Australian economy, and there are parts of China that also understand the long-term strength of our mining sector and really relate to the WA economy,” Mr Barr said.

“Those people will want to continue to invest in a strong-performing state.”

Another boutique developer to have experienced strong interest is Willing Property, particularly regarding its apartment project in the Bassendean town centre, The Whitfield.

Willing Property, which was founded by former Multiplex Living managing director Tim Willing, sold 60 per cent of the 34 apartments at The Whitfield in its first week on the market.

About 90 per cent of the buyers, Mr Willing said, were owner-occupiers, another indication that Perth residents were keener than ever on apartment living.

“If you’ve got 90 per cent of sales to owner-occupiers, I guess it’s appealing to them,” Mr Willing told Business News.

“I typically find if you’ve got owner-occupiers, they’re the hardest to get, and investors will come.”

However, targeting owner-occupiers is not the only strategy for Perth-based apartment developers.

Golden Group managing director Andrew Sugiaputra said the developer would target offshore investors from Indonesia, Malaysia and China to take up a big chunk of its massive, 4,500 apartment, multi-stage development at Belmont Racecourse.

Mr Sugiaputra said planning for the first phase of the project, which will comprise 1,400 apartments, was well under way, with development application expected to be finalised through the Town of Victoria Park by the last quarter of this year.

He said the first phase would be done in stages, subject to pre-sales and market demand, with the preliminary stage to comprise around 450 dwellings.

“We’re going with a slightly different structure so I’m not concerned about flooding the market,” Mr Sugiaputra said.

“We’re going to try and tap the overseas market more, but we still have to conform to what the banks require in terms of the limitations on overseas sales.

“Typically it’s around 30 per cent; whether or not we can push the boundary is up to our negotiations with the banks.”

But Momentum Wealth managing director Damian Collins warned that if too many apartments were taken up by investors, it would result in serious ramifications for the rental market.

“We already have a significant oversupply of rental properties in the CBD and the near-CBD market, so I think those types of investors are in for a pretty rough time from a rental point of view,” Mr Collins said.

“Getting tenants and even getting a price they envisaged when they bought them off-the-plan some time ago is going to be difficult.

“It comes down to demand and supply, and yes, there is more demand for inner-city living, there’s no doubt about that, but there’s also lots and lots of sites in the city that over the next decades will be bringing on lots and lots of supply to meet that demand.”