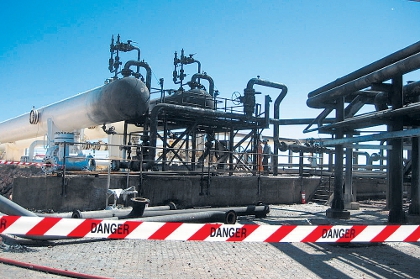 The aftermath of the gas explosion at Varanus Island

Mines and petroleum minister Norman Moore has also questioned Apache’s recent publicity campaign, which claimed it had been vindicated.

"They are trying to preserve their credibility, that's understandable, but I wouldn't have done it myself had I been them, because the response to their ads in the newspaper was quite incredulous," he said today.

The report, by Kym Bills and David Agostini, was commissioned by the state government following the June 2008 explosion, which cut one third of the state’s gas supply.

Mr Moore said he had wanted to release the report immediately after it was completed in 2009, but legal action halted its release.

The report said the risk of the pipeline explosion, caused by corrosion, was "not only foreseeable but to some extent foreseen" by Apache.

“The report concluded that Apache North West Pty Ltd has the ultimate responsibility for maintaining the Varanus site in good condition and repair,” the minister said.

In a statement today, Apache repeated its recent claim that it “had reasonable grounds to believe that the pipeline was in good repair”.

It also said that new material it supplied to the government “cast new light on the three-year old report”.

"Apache is mystified at the minister's failure to release these additional materials at the same time, in order to put the Bills-Agostini report in proper context."

The state government had sought to prosecute Apache over the disaster, but Mr Moore announced in March that criminal proceedings had been dropped, for two main reasons.

One was a technicality around the term 'pipeworks', the second was legal advice that the state could not prove that the company’s senior executives did not hold ‘the honest and reasonable but mistaken belief’ that the section of the pipeline in question was ‘in good condition and repair’.

Apache has put a new slant on that, saying today that “these additional materials completely vindicate the decision to dismiss the charge against Apache”.

"If Minister Moore elects not to table the Apache response and the additional reports, it plans to ask the magistrate's court to authorise their release."

If Apache does seek their release through the courts, Mr Moore said he would recommend that all documents be released publicly.

“There is a whole range of documents …..that have a different point of view from those two documents,” the minister said.

The report identified a range of major regulatory shortcomings at the time of the Varanus Island explosion, which the state and federal governments have moved to address.

However Mr Bills said “the primary duty of care is with the plant operator”.

The report stated that “Apache’s overlooking of issues raised by many consultants was presumably not deliberate”.

“It seems likely that low staffing, lack of corporate memory and inadequate systems to track issues raised by many of (the) consultants are not unimportant in seeking an explanation,” it added.

“There is also a question of safety culture given Apache’s excessive compliance emphasis and focus on ‘lowest possible cost maximising production availability’ in a duty of care/safety case regime.”