Anything but the band 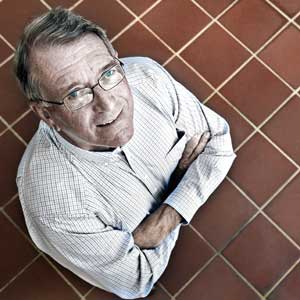 HERE is an austerity about Neil Hamilton that is hard to match with his role as a jet-setting company director and high-flyer in the glamorous world of Australian football.

Mr Hamilton admits to using public transport to get to business meetings in West Perth and buying takeaway Asian lunches from nearby student haunts.

He shares his Nedlands corporate digs with another well known yet relatively low-key director, Tony Howarth, and life-long mate Murray McHenry, with whom he has a friendship that goes back to student days when the then law student lived across the road from the McHenry family pub, Steves.

That office accommodation is so nondescript it could easily have been a set on the recent ABC series Very Small Business; 'functional' would be a fair description.

Then again, in a business career spanning 25 years, Mr Hamilton would have seen flamboyance at its worst, from the spectacular late 1980s to more recent years.

In 2004, he took the chair at the original Western Power utility after the extraordinary antics of managing director Stephen van der Mye became a political issue and prompted the resignation of former chair Malcolm Macpherson.

In his short-lived tenure, Mr van der Mye hit the front pages of the local newspapers for his lavish expenses and his decision to work in Perth on a fly-in, fly-out basis.

Along with the difficult job of patching up Western Power's management team and heading its disaggregation, Mr Hamilton recalls this was a tough period in his long business career because he had also joined the board of longstanding miner Sons of Gwalia at this time. Just three months later, administrators were called in after SoG failed to win over one of its biggest bankers.

However, he rates his toughest boardroom experience as that with insurer IAG, which was the insurance giant spawned by the demutualisation of Sydney-based automobile club NRMA.

“The single most frustrating and difficult time was the early days of IAG," he says.

“I was the first outside, non-NRMA person to come on to that board. It was divided and dysfunctional and it was a nightmare.

“We changed the board and it was like being in a completely new environment."

Mr Hamilton stepped off the IAG board in the past 12 months after about 10 years, a period he suggests is a self-imposed deadline for resignation. Similarly, he stepped down from Programmed Maintenance Services and will end his time with IRESS early next year.

He remains a director of Metcash, Northern Iron, and Mount Gibson Iron and plans to find another role soon to fill the gap.

“I have enough to make sure I am in the office every day," Mr Hamilton says.

“I have a 'full-time job', I don't know how I would maintain discipline otherwise."

His business career started in the entrepreneurial 1980s when he quit as a partner of Robinson Cox (which became Clayton Utz) to get into funds management.

At that time Perth was the powerhouse of the property investment sector. Mr Hamilton was involved in Pacific Mutual Australia, a successful group that played second fiddle to Dick Lester's national leader Growth Equities Mutual.

He later ran listed investment company Chieftain Securities for 12 years before winding it up earlier this decade. He was also chairman of Challenge Bank before it was taken over by Westpac.

Mr Hamilton's business career drew him into another field where he is well known - Australian Rules Football.

In the early days of the West Coast Eagles, he was involved financially in what was a then privately owned franchise. He gained plenty of profile during the involved process that occurred when the WA Football Commission took over the team.

He remains deeply connected with football as the chairman of the AFL Players Association.

After a decade on the board, Mr Hamilton believes a recent change in management means he may have to stay on to ensure proper succession, especially with the looming negotiations for television rights.

“I am not sure that 10-year rule applies in this case," he says.

Mr Hamilton says he enjoys the interaction with younger people and feels that having four children of his own in their 20s gives him an insight into some of the AFL players' issues, including crises like those that enveloped Ben Cousins.

“The greatest learning from this is you are dealing with issues that are societal," he says. "It is magnified but this is actually a symptom of a bigger problem in society that we need to deal with."

Mr Hamilton clearly thrives on adversity and, maybe, that is the secret of his greatest passion - reading and collecting military history books.

He believes his library would be worth more than $100,000 and has made a point of linking his holidays to opportunities to visit sites of military significance - including completing the Kokoda Track, walking the route of the Sandakan death march in Borneo, and going to the notorious Burma railway where Australian POWs suffered so badly.

Mr Hamilton says his interest was sparked by family talk about the military service of his grandfather, his father and two uncles, one who died at El Alamein. Even his middle name, Douglas, is linked to a friend of his family's who died fighting in Syria.

But his interest never led to him joining up. His closest brush with military service was being part of the cadets during his school days at Scotch College.

“I think we only did that to get out of music," Mr Hamilton recalls.

Where did your passion for Australian military history come from?

My interest comes from the kitchen table; we were that generation where everyone was talking about it. The delightful thing for me is my kids are showing an interest.

Do you have an underlying business philosophy - a way of acting or thinking that grounds your decision-making?

“I suppose if there is a fundamental thing I look at and seek to apply at the various boards and companies I am involved with it is principally satisfying myself in making sure the company has a serious sustainability philosophy. I don't mean in the environmental sense, what they are doing and the business they are running must have long-term plans and values and behaviours that guarantee it has a sustainable product and model. That is often defined by the satisfaction of the people you service; ultimately that is the test."

Do you see yourself doing more work on government boards?

“Since 2006 I have not had any significant involvement in the government stuff. That (Western Power) was interesting public policy stuff. I probably will go back into that space at some stage. I think business people have an obligation to make a contribution to these things, particularly the provision of infrastructure. But I am not seeking anything out."

Your directorships have a significant east coast and international element, why?

“I like the diversity of having some here and over east, it keeps me in the loop with what is happening over there."