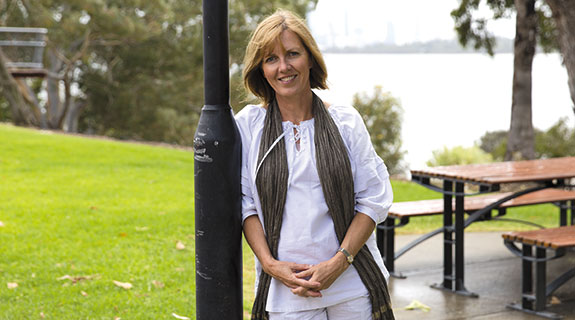 Ms Forder started the Self Awareness Academy in 2014 after studying Vedanta, a philosophy which translates as ‘the goal of knowledge’, for six years in India.

The academy is a non-profit organisation offering classes and retreats, and Ms Forder is hopeful a guest appearance by her long-time India-based teacher will attract a strong crowd for a seminar being held in Perth this week.

After initially teaching Vedanta techniques to people on an ad hoc basis, Ms Forder said she finally found ‘traction’ teaching people how to develop their capacity to think, reason, judge and decide only after creating the academy.

So far more than 100 ‘stressed out’ Perth residents, including business people, stay-at-home mums, and engineers are set to meet India’s self-styled business guru, the 88-year old Swami Parthasarathy, this week.

In a seminar on governing business and relationships the swami, whose active lifestyle includes frequent global travel and playing cricket, told Business News he would discuss how to focus the mind, rather than look for results.

Mr Parthasarathy said his teachings were aimed at developing one’s personal intellect as distinct to one’s intelligence gained from outside knowledge (such as formal education), could be thought of as a take-it-or-leave-it buffet.

“I’m not anxious to change people, I’ve not come here to reform the world,” he said.

“I’ve come here to present certain facts which people don’t know. You can think of it as a buffet, you take it or leave it, it’s up to you, I don’t hope for anything.”

He is confident, however, that his teachings will strike a chord.

“The rest of the world has had an excellent response and I do believe that Perth will also respond,” Mr Parthasarathy said.

Ms Forder, whose academy relies on the support of a half-dozen volunteers, and who is yet to draw a wage from her endeavours, said she was driven by a desire to share what she’d learned from Vedanta.

“The type of people I’m getting along are people who have an inquiring mind, wanting to know what is beyond the material world we live in, people who believe there is something more to life,” she said.

“At the beginning of last year when we started we had very small classes, we have grown participation by at least 70 per cent and (the number of) courses have actually grown by 100 per cent.”