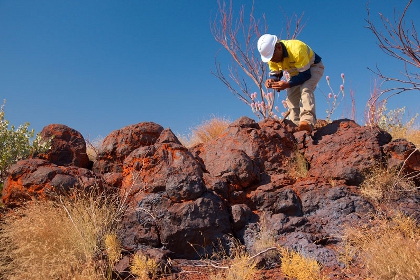 A geologist examining rock samples at the Roy Hill project.

Claude Dauphin and Gina Rinehart are two of the richest people in the world with fortunes built on commodities, but that’s where the comparison ends because Dauphin is pessimistic about future commodity demand and Rinehart has to be an optimist.

The reason Rinehart must appear confident is that she is in the final stages of stitching together the design, construction and funding aspects of her proposed 55 million tonne-a-year Roy Hill iron ore project in the eastern Pilbara.

To be less than optimistic would send the wrong signals to prospective bankers for Roy Hill which has a notional $10 billion price tag, a heavy lift even for Australia’s richest person.

Dauphin is founder and major shareholder in Trafigura, one of the world’s biggest commodity traders, but a man rarely seen or heard in public. He will have not done Rinehart a favour in his annual letter to holders of bonds in his business, saying that “a return to the buoyancy of the commodities market between 2003 and 2007 is unlikely”.

Those words were interpreted by London’s Financial Times newspaper, which stumbled across a copy of Dauphin’s private letter, as meaning that “the good old days of the past 10 years are all but over.”

Dauphin wrote that the growth outlook for China remained good, but the growth would be: “less materials intensive”, code for slower growth in commodities consumption.

Rinehart probably does not need a return to the boom to secure the funding required to develop Roy Hill but Dauphin’s caution comes at a tricky time because it meshes with the downbeat commodity-price outlook of other well-connected market observers, including the world’s top investment bank, Goldman Sachs.

According to the most recent set of price forecasts from Goldman iron ore is looking good for the current year with a likely average price of $US144 a tonne for 62 per cent fines, the highest grade of the most commonly-traded from of iron.

But, next year a long price slide is expected to start with the average price falling to $US126/t, and then down again to just $US90/t in 2015.

If Goldman is right, and price tips are often just one man’s best guess, then not only is the iron ore forecast in line with Dauphin’s warning but it also accords with recent reports that Rinehart’s team is pushing hard for a big cut in the estimated Roy Hill capital cost.

Seeking a lower price to construct a mine is good business practice and to be expected of every developer so, in that regard, there’s not much news in Rinehart asking her potential contractors to sharpen their pencils.

But, when one of the potential contractors is also a shareholder in Roy Hill, which is the position held by one of Korea’s biggest companies, Posco, then a request for a better price can understandably trigger a little friction.

No-one at Posco is talking, and the Rinehart camp has only responded, so far, to media requests for information on the tendering process, with predictable replies, telling The West Australian newspaper last week that: “over the past six months a successful value engineering exercise has been underway to identify cost reductions and efficiencies across the whole project”.

There was also confirmation that Roy Hill will be unlikely to hit a target of first ore by late next year.

And here lies the squeeze on Roy Hill. As Rinehart seeks to drive the construction cost down she is also effectively delaying development and that could potentially achieving little because adding a year to the start-up date means walking headlong into a world of lower commodity demand.

As a business, Rinehart’s master company, Hancock Prospecting, is undoubtedly banking handsome profits from its half-share in the Hope Downs mines and the evergreen Hamersley Iron royalty.

But, getting Roy Hill across the starting line at a commercially viable price will require a concerted effort and that’s potentially why there’s been a little bit of deck-clearing underway in recent days, including the sale of parcel of shares in Mineral Resources.

The estimated $60 million profit from exiting Mineral Resources is a handy titbit for Rinehart but the real message in the trade is that it removes a distraction at a time when Roy Hill requires close attention.

It will be interesting to see if other distractions, such as shareholdings in the Ten television network and the Fairfax media company are also jettisoned as part of the focussing process.

As for campaigning against the mining tax in this year’s federal election well, that would really be a distraction that might not please bankers to Roy Hill who prefer to deal with a lower profile client that is concentrating on one challenge at a time.