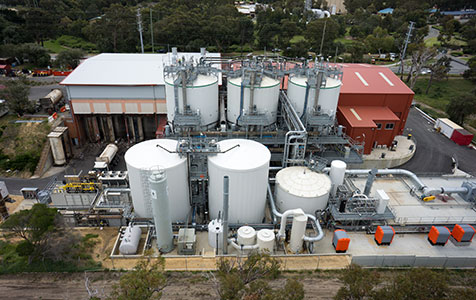 AnaeCo announced today that the biological ramp-up phase of the WMRC project had been completed following commissioning of the final item of equipment – a biogas scrubber.

The plant, which owned by funds managed by Palisade Investment Partners, is now in a short maintenance shutdown, in preparation for the final commissioning phase, which comprises performance trials.

The project was hit by numerous set-backs during the biological ramp-up period, including a five-month delay as a result of water storage tank leaks, and about two months for faulty mechanical equipment which was vital to conveying systems servicing the bioconversion vessels.

“During the biological ramp-up phase a number of refinements were applied to the wet density separation system which was installed at this facility in a prototype form,” AnaeCo said.

“Performance has significantly improved as a result of these refinements and the efficacy of removing glass, grit and heavy inerts from the fine fraction of waste produced by trommeling, has been proven.

“There have been a number of valuable engineering and operational lessons learned from this biological ramp-up period which will be applied in future plant designs,” it said.

At full capacity, the plant can produce biogas containing around 1,200 tonnes of methane per annum, with the energy content able to fuel the generator to provide around 800kWe of electrical power and 800kWt of thermal power.

Last month, AnaeCo received approval for the plant to be connected to the electricity grid by Western Power.

Monadelphous boosted its stake in AnaeCo to 15.3 per cent last year, after taking extra shares for services it had previously provided to the company.