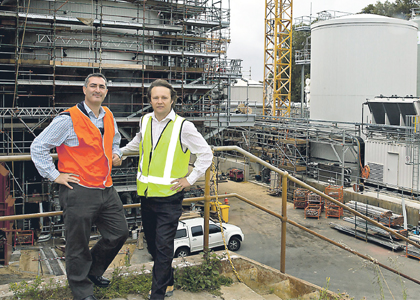 PERTH-BASED AnaeCo is nearing the end of a 12-year journey to commercialise its patented waste management technology, DiCom.

The DiCom technology, which turns municipal waste into biogas and compost, is the driving force of the Western Metropolitan Regional Council’s new waste management plant in Shenton Park.

Construction of the facility began in late 2010 and has now been completed. Pre-commissioning testing is currently under way before the first lot of waste is put through the system next month.

AnaeCo managing director Patrick Kedemos told WA Business News it would then take until about May or June next year - “all going to plan” - before the plant reached full capacity. That would involve processing between 55,000 and 60,000 tonnes of municipal solid waste a year, a significant expansion on the existing 22,000t pilot plant.

About half of the waste would be converted into compost and the remainder either separated out for recycling or sent to landfill.

AnaeCo has developed the plant with joint venture construction partner Monadelphous under a design-and-construct contract for Palisade Investment Partners, which is fronting up the $57 million capital cost.

The WMRC is contracted to provide waste to the facility for at least 20 years. Palisade has signed contracts with garden product supplier RichGxo for the compost, while it has agreements with Western Power to feed energy from the plant into the grid.

AnaeCo has tipped commercialisation of the Shenton Park facility as the trigger needed to get the ball rolling on future contracts.

“It’s an expensive product, so people want to make sure that things are working well before they make a decision on spending $100 million to $200 million,” Mr Kedemos said.

He said there had been significant interest from a number of parties, both within Australia and internationally.

“I believe 2013 will see us with some sort of arrangement for another plant... will it be a situation where a number of people are ready to move, or will they wait until the plant has been running for a while, I don’t know,” Mr Kedemos said.

“We’ve been around for 12 years now, so people know who we are.”

AnaeCo has signed memorandums of understanding with a number of parties to explore commercialisation of the DiCom technology, including Perth-based renewable energy company Bioverse Energy, and E)ynagreen Environmental Protection Group, a subsidiary of the Beijing State-Owned Assets Management Company.

Mr Johnson said the construction process had gone relatively well and completed not far off the estimated timeframe.

During the construction phase, Monadelphous took a 10 per cent stake in AnaeCo after it incurred costs AnaeCo was unable to pay for. The resulting agreement meant Monadelphous gained 44 million shares in AnaeCo at an issue price of 4.8 cents each.

AnaeCo’s shares have since dropped to below 3.5 cents each.

The December commissioning of the WMRC facility will coincide with the South Metropolitan Regional Council’s opening of its new $20 million materials recovery facility and completion of upgrades to its c omposting facility.

The council was ordered to close its composting plant earlier this year by the Department of Environment and Conservation due to odour concerns.

It was subsequently allowed to keep operating at a reduced capacity while it made improvements to manage the odours, with work due to be completed mid-next month.

Its new $20 million recycling facility was built after the previous facility burned down in 2009.

The Eastern Metropolitan Regional Council also has plans to implement state-of-the-art waste management technology, having lodged a proposal with the Environmental Protection Authority for approval to build a waste to energy plant at its Red Hill waste facility.