Altura Mining has taken the next step to double capacity at its Pilgangoora project, approving a definitive feasibility study for expansion to 440,000 tonnes per annum of lithium concentrate, while confirming shipments from stage one of the mine are due in the second quarter of 2018. 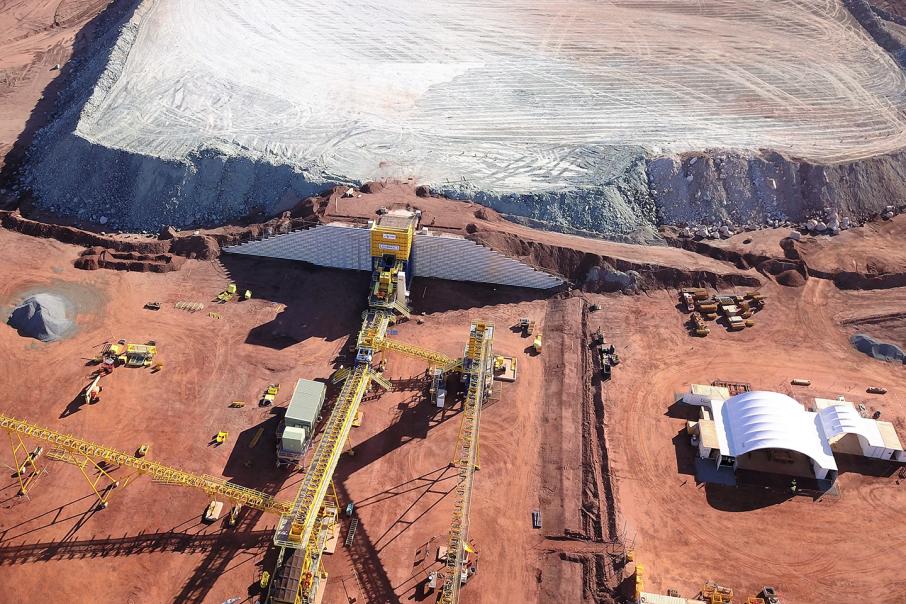 Altura estimates work at the Pilgangoora project is 50 per cent complete.

Altura Mining has taken the next step to double capacity at its Pilgangoora project, approving a definitive feasibility study for expansion to 440,000 tonnes per annum of lithium concentrate, while confirming shipments from stage one of the mine are due in the second quarter of 2018.

Construction of the first stage of the facility, located about 100 kilometres south of Port Hedland, is about half-way complete, with commissioning expected in the first quarter of 2018.

That initial stage is expected to produce 220,000tpa of lithium concentrate.

If finalised, part of the increase in capacity would come from the introduction of night shift mining, making it a 24-hour operation, according to a recently completed scoping study.

The company's stage one plant would be duplicated.

Minor improvements to infrastructure such as boreholes and within the accommodation camp would be needed, while mining contractor NRW would continue to use its existing mining fleet at the project.

It would be about 17 months from any final investment decision to production, Altura said, although the company believes it can shorten this period through early ordering of particular long lead equipment.

The definitive feasibility study is due in April.

Altura Mining managing director James Brown said one opportunity for the business would be with car manufacturers seeking offtake deals or contributing funding to the project to secure their lithium supply.

He said interest in the lithium mining space had moved beyond just processors of the metal, with car makers keen to have their own access to the material used in batteries for electric vehicles.

There was potential for both Asian and European manufacturers to be involved in the project, Mr Brown said, as it provided a low-cost way for them to ensure their survival as the world moved towards electric vehicles.

In the neighbourhood
Just a few kilometres away from the Altura pit, Pilbara Minerals is digging its own Pilgangoora mine, the first stage of which is expected to produce 314,000tpa of lithium with an additional dose of tantalum, a metal used in alloys.

The company has feasibility work under way to lift production to as much as 800,000tpa, and has recently secured an offtake agreement with Chinese motor business Great Wall for 75,000tpa of stage two production.

Altura’s Mr Brown said his company and Pilbara Minerals had a close relationship, with the businesses sharing costs on an access road and briefly sharing worker accommodation facilities, as two examples.

Also nearby is Mineral Resources’ Wodgina direct shipping ore operation, which that company expects will produce 4.25mt of unprocessed lithium ore in 2017.

MinRes has also said it would begin installation of a spodumene concentrate plant at Wodgina, which will be a modularised facility, in the December quarter of this year.

The plan is to install up to three modules over time with total capacity of 750,000tpa.

Mr Brown said a further possible collaboration between miners in the region would be the potential construction of downstream lithium processing capacity in the Pilbara, similar to the Tianqi lithium hydroxide plant currently being built in Kwinana.

That would have the advantage of much lower haulage costs to get concentrate from mine to plant, although finding sufficient cheap power would be a hurdle.

Mineral Resources has previously said it was undertaking feasibility work on a Pilbara processing plant to ship about 50,000tpa of lithium carbonate, with a gas-fired power station nearby to the Wodgina mine a potential plus.

Mr Brown also flagged potential for further consolidation in the industry, although it was not yet clear who might lead the way on that front.

An example was Chilean lithium miner SQM, which had taken an interest in Western Australian hopeful Kidman Resources.

That broadened the Chilean’s reach from brine into hard rock lithium production, which usually requires less processing to be used in batteries.

Matt Mckenzie was a guest of Altura Mining at a recent media tour of the project.