All in for Stirling effort 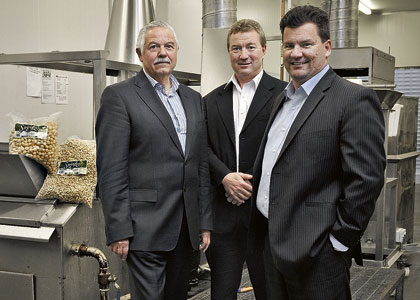 THE men behind the second largest Western Australian-based franchise have come on board to help rebuild struggling Stirling Foods.

Chicken Treat founder Frank Romano and the company’s previous chief executive, Jason Marlborough, have taken a 50 per cent stake in Stirling Foods, which was founded by Barry McGougan in 1984.

Mr McGougan sold the business in 2007 when it was turning over more than $12 million, only to regain involvement when he and four other WA businessmen bought the company from administrators late last year.

By that time the interim owner had bought main rival Olympic Fine Foods – another local brand – for $1.83 million.

Part of Mr McGougan’s new team, Brenton Cunningham, said the company had gone through a year of stabilisation since being rescued from receivership and was tracking for turnover of $5 million – enough to take the company close to breaking even.

Mr Cunningham said the goal now was to increase turnover to $6.5 million and secure an inter-state supply contract worth more than $3 million.

“There’s a lot of confidence that we’ve got the right person in the operations chair and the right partners that have got the connections to make it happen,” Mr Cunningham said.

Mr Romano and Mr Marlborough both sold their interests in the Chicken Treat business in July last year and were looking for the next challenge when the Stirling Foods board knocked on the door.

“Our main desire to be involved in this business is that it has enormous upside as two well-regarded West Australian brands,” Mr Romano said.

“By adding our expertise and input into the board and management, it’s going to continue being so.

“After 35 years, food is what we’re made of, and we’ve learnt a lot ... all we can do is enhance and expand it with the expertise we have.”

With the entrance of Mr Romano and Mr Marlborough, Mr McGougan took the opportunity to revisit his retirement plans, selling his share in the business.

The new Stirling Foods team is in the process of establishing a strategic plan, but Mr Marlborough had already identified areas to focus on. Rebranding is one, with action on this to be undertaken within a year.

“Our experience is managing multiple brands and we see a distinct market and opportunities for each brand,” Mr Marlborough said.

“Part of that is to expand into new markets within Australia and export whilst maintaining the brand as a local ‘hero’ brand for West Australians.”

Despite the company’s turbulent history, Mr Romano was not concerned with its chances of future success.

“The ownership put in place last October had some initial issues of buying from a receiver that probably didn’t understand the business,” he said.

“But for us the past has no relevance for the future; there’s only one way to go, and that’s forward.”