All bets off, asset sales on

Asset sales are expected to feature heavily when the Barnett government releases its budget in May. 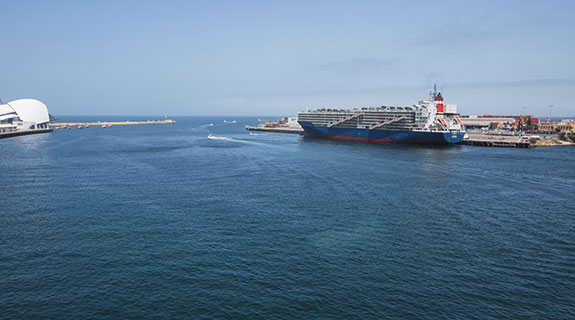 BIG-TICKET ITEM: There could be movement regarding the sale of Fremantle Port in the second half of the year. Photo: Attila Csaszar

Asset sales are expected to feature heavily when the Barnett government releases its budget in May.

The May state budget will be designed to cause as little electoral pain as possible, with the proceeds from asset sales targeted to ensure there is no further deterioration in the bottom line.

Premier Colin Barnett’s assurance at the recent Business News Success & Leadership breakfast that taxes will not be increased in the budget, despite the predicted record $3.1 billion deficit, is evidence of that.

And the odds are shortening quickly on the sale of Western Power getting the nod from cabinet and providing a boost of up to $15 billion in revenue projections.

Mr Barnett is still to be convinced on the merits of the sale, insisting that he prefers responsibility for the poles and wires continue to rest with government, regardless of which side is in power. But he is also a realist, noting that influence over a privately owned power utility could be retained through regulation.

And with rapidly changing technology improving the viability of renewable energy alternatives, there is a view that the value of such publicly owned assets is likely to head south. So if you are thinking of privatising, there is little point holding off.

There are two conflicting points of view over asset sales. The first involves a rational assessment of why government continues to be responsible, and bear the cost, for certain key functions it established years ago. For example, would the South West power grid be so extensive if its construction had been left to market forces?

The answer clearly is no, but now, with a significantly increased population and demand for power, does it make sense for such services to continue to be government dominated? Many say ‘no’ to that as well.

Then there are the state-provided services that were sold years ago. For example one of the first things the Brand coalition government did in the early 1960s was sell assets such as the state hotels and sawmills. In the late 1990s, Richard Court’s government put the for sale sign up on enterprises like the Dampier to Bunbury gas pipeline ($2.4 billion), AlintaGas, and Bankwest, formerly the Rural and Industries (R&I) Bank.

The counter view to selling is that government should control essential enterprises in the interests of all taxpayers, and not be guided simply by the market. Plus, many enterprises are good money-spinners and provide a useful dividend to boost revenue.

The foundations for the current round of sales were laid by then treasurer Troy Buswell in the 2013-14 budget. His successor, Mike Nahan, has pushed the issue, aided by encouragement from the Chamber of Commerce and Industry of WA, the federal government and ratings agencies.

Dr Nahan told Political Perspective that the $135 million gained recently for the Canning Vale markets was a fair price after a contest between two vigorous bidders.

The Utah Point loading facility at Port Hedland could be next. Record volumes of ore exports have to a degree offset the slump in iron ore prices. A price of up to $600 million has been touted, although the sale could be dropped if the offers are too low.

The Totalisator Agency Board is also a likely sale, which begs the question of why the government is encouraging gambling in the first place? Provided there are adequate safeguards for the struggling turf, trots and greyhound sectors, and country clubs, the TAB sale is likely to proceed for around $1 billion. Tabcorp and Tatts are the main suitors.

Another big-ticket item is the port of Fremantle. Enabling legislation is well advanced and Dr Nahan says there could be action in the second half of the year, with a price tag around $2 billion.

Approval has also been given for the sale of up to $1.6 billion of Keystart’s loan book, as well as properties such as shopping centres, and surplus land.

On a different front, Dr Nahan has been in intense negotiations with his federal counterpart, Scott Morrison, over the royalties agreement for the North West Shelf. WA paid for the bulk of the infrastructure there with virtually no recognition from the Commonwealth Grants Commission. Possible return could be an extra $4 billion over four years.

It’s all designed to help the budget bottom line. But in this business there are no safe bets.