Chevron has signed a domestic gas sales deal with energy retailer Alinta Energy for the supply of about a quarter of planned production from its Wheatstone project near Onslow. 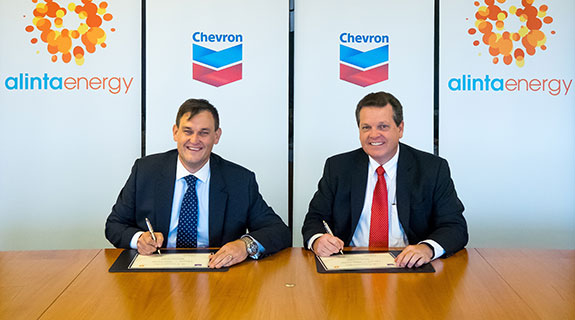 Chevron has signed a domestic gas sales deal with energy retailer Alinta Energy for the supply of about a quarter of planned production from its Wheatstone project near Onslow.

Starting in 2020, Chevron will supply Alinta with 20 petajoules of domestic gas per year under a seven-year deal.

Gas from Wheatstone will be delivered from Onslow through a pipeline to an inlet point on the Dampier Bunbury Natural Gas Pipeline.

With the expected output capacity of the facility, the Alinta offtake deal is equal to about 25.6 per cent of gas produced per year.

Chevron-operated Wheatstone is expected to deliver gas to the Western Australian market from 2018.

Chevron Australia managing director Roy Krzywosinski said Wheatstone would be a significant new source of energy for WA and would be a leading domestic gas supplier for many years to come.

“At full capacity, the Wheatstone project has the capacity to produce 200 terajoules per day of domestic gas for the WA market,” Mr Krzywosinski said.

“This agreement is an important step in Chevron's rapidly expanding domestic gas business in WA and the establishment of our leading domestic gas portfolio across the Wheatstone, Gorgon and North West Shelf Projects.”

When completed, Wheatstone will consist of two LNG trains with a combined capacity of 8.9 million tonnes per annum.

Earlier this month it was revealed gas production at Chevron’s recently completed Gorgon LNG plant would be halted for at least a month due to mechanical issues on one of the LNG trains.