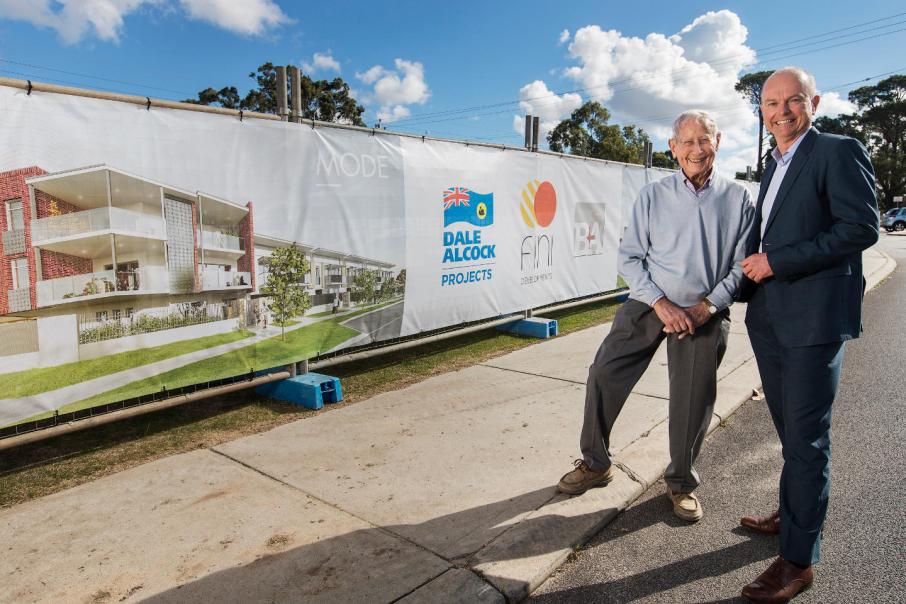 Tony Fini (left) and Dale Alcock came together under a shared goal to offer more housing choice and diversity in the Perth market.

Construction is already under way on the pair’s joint venture project named Mode, located on a 3,423 square metre site on the corner of Channon and Mills streets in Cannington, with completion anticipated for July 2019.

Mode represents the first time building and property sector players Mr Alcock and Mr Fini have worked together, with a shared goal to champion more diversity and choice in housing to fill the gap created by the missing middle.

The missing middle phenomenon has emerged in the state’s property sector of late, with building approval trends showing substantial development at both ends of the density scale – for semi-detached homes and four-storey plus apartment complexes – but a lack of activity servicing mid-range projects, for apartment and townhouse developments at two to three storeys.

The development is in close proximity to Curtin University and the recently revamped Westfield Carousel, which has been identified as a key transport node to support the Perth 2050 transport plan.

While Mr Alcock is best known for his home building businesses that fall under his company of 40 years, ABN Group, the organisation also has an apartment development arm, Parcel Property, and offers financing services.

Mr Alcock said as traditional housing options were still out of reach for many buyers, Perth needed to offer more than simply a choice of high-rise apartment or a suburban house.

“Mode represents the new breed of development designed to bridge the housing gap by offering affordable, well located, low-rise homes that will have huge appeal to a range of buyers, including families," he said.

“More and more buyers of all ages are recognising the value in being able to walk to the shops, to school or to the cinema, but they don’t necessarily want to live in a high-rise apartment to be able to do so.”

Founder of Fini Developments and father of property developers Adrian and Don Fini, Mr Fini will bring more than 60 years of experience to the alliance and said Mode was aligned with the state government’s urban infill policy, which aims to bring people closer to existing infrastructure and amenity.

“The benefits of medium-density development such as Mode are substantial, including more homes on less land, increased sustainability thanks to a smaller urban footprint, and options for buyers to stay close to family, friends and an established community network,” Mr Fini said.

Mr Fini hopes Mode will be a catalyst for more medium-density housing projects.

The City of Canning has become an increasingly popular spot for property development, particularly around its city centre where upgrades to Cecil Avenue, next to Westfield Carousel, are under way.

The latest project announced within the city centre is Georgiou Developments’ three-stage masterplan for a site on Cecil Avenue, close to the Cannington train station.

The City of Canning sold the site to the business earlier this year for $6.6 million.

Georgiou Developments plans to release more information in the coming months and it’s anticipated the masterplan will include residential apartments, as well as ground-floor retail and commercial space.