Macquarie Capital and Brookfield Asset Management have agreed to buy Apache Corporation's Australian oil and gas operations for $US2.1 billion ($A2.7 billion), with the deal underpinned by a long-term gas sale agreement with Alcoa. 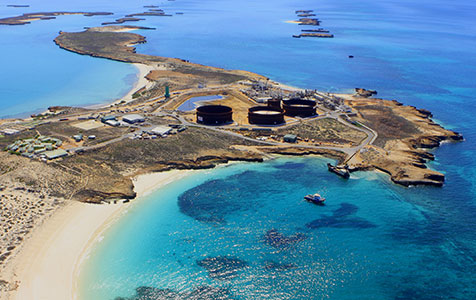 Apache is selling its interest in several assets, including the Varanus Island gas plant.

Macquarie Capital and Brookfield Asset Management have agreed to buy Apache Corporation's Australian oil and gas operations for $US2.1 billion ($A2.7 billion), with the deal underpinned by a long-term gas sale agreement with Alcoa.

Brookfield and Macquarie Capital said the acquisition would form the foundations of a new intermediate oil and gas producer.

They will jointly manage and each initially hold a 50 per cent investment in the new vehicle.

In a statement, they said the business would continue to have a strong focus on the growth of Western Australia's domestic gas market and consistent with this, a 12-year gas supply agreement for 120 terajoules per day of natural gas, commencing in 2020, has been entered into with Alcoa of Australia.

They said this long-term contract with Alcoa would underpin the consortium’s commitment of future capital to the business’s gas assets.

Alcoa said the new agreement, combined with a number of smaller agreements, means it has secured approximately 75 per cent of its WA natural gas requirement, replacing long-term contracts that expire at the end of the decade.

As part of the gas supply arrangements, Alcoa will make a prepayment of $US500 million in two instalments – $US300 million on financial close of the Apache asset sale in 2015 and $US200 million in 2016.

“Our refineries in Western Australia supply more than 8 per cent of global alumina demand. Securing a low cost position for these facilities is closely aligned with Alcoa’s strategy of creating a globally competitive commodity business,” he said.

Mr Cransberg said the company would continue to pursue options to ensure 100 per cent of its WA energy requirements were met.

“While this contract alleviates most of our medium term need, we continue to be very concerned about the ability of businesses in Western Australia to secure long term, internationally competitive gas supplies,” he said.

“The availability of domestic gas remains a key issue for the future prosperity of Western Australia.”

Apache Australia managing director and CEO of the new entity, Brett Darley, said he was excited to lead the transformation of Apache’s Australian assets and interests.

“With a record of exploration and production excellence spanning more than two decades in Australia, our people are well placed for this important new chapter as a significant Australian oil and domestic gas company,” he said.

The assets to be sold comprise:

- Apache’s interest in operated oil fields at Coniston-Novara, Van Gogh and Stag and the non-operated interest in the BHP Billiton operated Pyrenees area;

- interests in domestic gas plants at Devil Creek, Varanus Island and Macedon; and

- all of Apache’s upstream acreage in the Carnarvon, Exmouth and Canning basins along with related hydrocarbon reserves, resources and production.

The transaction is expected to close by mid-2015.

The sale marks Apache's exit from oil and gas exploration and production in Australia, although the company will retain its 49 per cent ownership interest in fertiliser producer Yara Pilbara Holdings.

This stake is a legacy of a gas supply contact Apache stuck with the developers of the plant.

Apache has been selling assets in recent months as part of a strategy to focus on oil production in North America.

The announcement comes just days after Apache announced the completion of the sale of its interest in the Wheatstone LNG project and related oil and gas properties in WA to Woodside Petroleum for $US2.8 billion.

"Following the sale of our Australian assets, approximately 70% of Apache's production will come from North America onshore.

"Our robust North American position is complemented by our North Seaand Egyptian regions, which have an extensive inventory of prospects and assets that generate free cash flow."